“Oh God! What is that smell?” There was silence on the other end of the small sofa. “Did you do that?”

“Must have been the cat."

“I’ve smelled the cat. That was not the cat.” I grabbed the green pillow and fanned the air.

“Sorry, then, it must have been my butt.”

“It was your butt all right. Ack!” I pulled the pillow close to my face to act as a sort of crude gas mask.

The next morning, it’s my turn. And, rather than harbor my shame in secrecy, I just decide to announce it and declare my ownership. “Excuse me!”

He snorts and rolls over to face the wall, away from me. 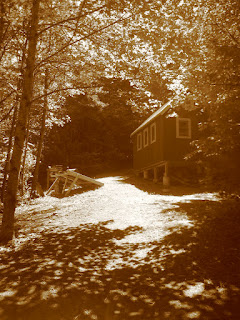 Here’s the thing, folks. The house is tiny. Very, very tiny. 120 square feet tiny, in fact. And you know what? Smells happen. All kinds of smells. If we don’t scoop the litter box immediately after use, it smells until we do. If we’re cooking onions, the house will smell like onions. If someone uses the very small bathroom, there is often an associated smell that hangs in the air until it dissipates. But, much like larger homes, our house also has windows. We even have a fan that can help with airflow. We can even buy air freshener.

We also have a huge, enormous great outdoors where one can escape if something is particularly noxious. Escaping outside isn’t even that big a deal because in only 120 square feet the door is never that far from wherever a person happens to be in the house.

Matt and I have been together a very long time. It was about 18 years ago or so that we stopped worrying about whether or not someone might pass gas in the same room as the other person. It didn’t ruin the romance. It didn’t make either of us love the other one just a little less. Bodies are just a fact of life and when we decided to share our lives with another body, it meant everything. Including farts with some sense of regularity.

“How do you live in such a small space with another person? How do you not kill each other? What do you do if someone farts?”

All of these questions are so common. I have answered them frequently over the years often with the same general theme. We can live in a small space together because we genuinely like being around each other. We haven’t killed each other yet because that would be messy and would end with a televised court case and, likely, jail time. When someone farts, we either ignore it or make a big deal out of it, or somewhere in between.

We enjoyed spending time with each other before we built a tiny house. We enjoy being together in the tiny house. If we ever stop enjoying each other’s company, it may be time to reevaluate things. We don’t see that happening, but you never know.

The tiny house is a thing. For us, it was an adventure that allowed us to grow together. As we say all the time, it was just one more weird thing in a long list of weird things that we’ve done over the course of 21 years. There was also that time we drove to New York City for New Year’s Eve in 1998 without any real plans. Or maybe the Halloween themed bathroom we had in our house in Atlanta. Oh, and the time we marathoned the last 4 Harry Potter movies at the local Brew and View movie theater and brewery. Those are just the tip of the iceberg.

I’m not a relationship expert. In fact, since I have been in the same relationship since I was 19 years old, I am probably the opposite of someone you want to give you relationship advice. I have no idea how it works. It just works. But I can tell you that a tiny house won’t work for everyone, especially if you’re particularly worried about farts.