Lessons from 5 years Ago

Posted by Laura LaVoie on January 09, 2016
On this day, in 2011, Atlanta saw the first flakes of snow that would become an epic Icepocalypse. It wasn't the first blizzard Atlanta had ever seen, and it wasn't even the last one. There will be more. But it was my last, and worst, snow experience while living in Atlanta from 2003 to 2012.

And it was also my first taste of freedom. 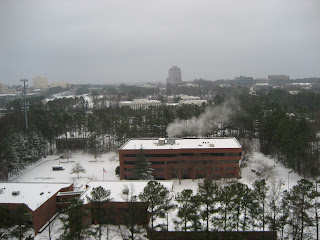 The Icepocalypse flipped a switch in me that was impossible to disconnect after the fact. See - we had already started the process of building a tiny home. We started building our home in the spring of 2009. We had already been working on it for two years - and about a year and a half longer than we had originally imagined. It is really easy to underestimate the time of a build, especially when you're doing things for the first time in your life.

In January of 2011, Matt and I were already living in an apartment on the north side of Atlanta. The year before we had sold our 2700 square foot house to begin the simplifying process. Our 16th floor high rise apartment was only 800 square feet but even in our first days I knew I could go smaller. I was so ready to make this change.

When the blizzard hit on that Sunday, everyone in the city knew that the next day would be a free day. Mondays are perfect for snow days. Schools were closed by 5pm that night. Bosses, like my own, called their employees in that evening and with the joy of a child waiting for Christmas announced that things would be closed on Monday. That night, I watched the snow fall from above the city, and it was magical. 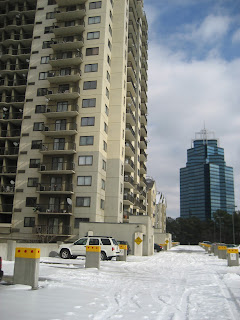 And the next day, everyone in Atlanta felt that magic. Matt and I used this opportunity to walk to a local bar. The bars are always open, even when the rest of the city is completely closed.

On Tuesday, the snow was still there. In fact, it had begun to melt but froze again over night leaving behind sheets of ice rather than soft, glistening snow. Atlanta was closed on Tuesday, too. And Wednesday.

By then, local businesses began to panic. I worked in temporary staffing so no work for our employees meant no pay and while one snow day was fun, three were a problem. Our clients had business to conduct and our employees couldn't wait another day for 8 more hours of pay.

And yet, in this time off from work I relished in my freedom. I had been restless in my job for some time. In fact, it was one of the reasons I had for starting our tiny house project in the first place. It gave me a place to spend my energy and a goal to look forward to. When it was done, I would quit my job and BE a writer.

When the city finally went back to normal by the following Monday, all I could feel was a sense of dread. My tiny house was not yet complete and my dream would need to be deferred a little longer. I needed to act like nothing was wrong and do my job, but that week made it harder than ever. For the first time, I got a real taste of the freedom I was craving. I was in charge of my own time and I could be creative or go for a walk in the middle of the day. I wasn't chained to a desk until 5:30 at night regardless of whether I was finished with my work for the day. 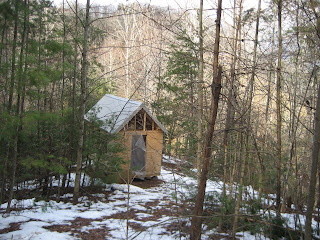 Don't get me wrong. I didn't resent the company or the people I worked for. What I resented was that I had put myself in that position to begin with. That I had followed this path of least resistance that came with all the trappings. That we had bought a too-large house with a mortgage that we had to work long hours to pay off. That I had allowed myself to believe that having health insurance was more important than fulfillment. That I had given myself permission to get comfortable, and in turn made my own life unbearable.

Even though we had already started the process of building our tiny home, it was on this day in 2011 that I knew that I needed to do anything I could to make this new future happen for me. That I couldn't go back to this way of life that everyone seemed to think was not only normal but essential. That I needed this feeling of freedom every day, not just when nature bestowed it upon me.

I am thankful to the Icepocalypse. Looking back on it now, 5 years later, I can see it gave me the push I needed to keep working toward my goal. I am grateful that even a snowstorm can teach us lessons that will last a lifetime.
atlanta live deliberately snow