Posted by Laura LaVoie on June 30, 2014
Tiny house bathrooms aren't as glamorous as kitchens or living spaces. They often don't get a lot of love on the internet. Yet, any time a tiny home is posted somewhere on the internet the comments seem to indicate that people are very interested in knowing more about the bathroom.

Our tiny house bathroom hasn't showed up too often in blog posts. Part of the reasons for this is because it is awfully difficult to take good photos of the smallest space in an already small space. I suppose the other reason is because a bathroom is a pretty private spot in the house. We don't usually want everyone and their brother knowing what goes on in our toilet or shower area.

But I thought I would give you a little peek into our bathroom space just this once so you can see some of the decisions we made while building it and how it works for us.

We built our home using tiny house plans from Tumbleweed Tiny House Company while it was still owed by Jay Shafer. The model, called the Tarlton, featured an L shape kitchen and a corner bathroom at the back of house. This seemed easy enough for us to tackle as first time home builders.

The biggest challenge was finding a shower to fit the space. We had thought about building our own shower enclosure but because this was the first time we had ever built anything we didn't want to have any major problems with leaking water anywhere. So we decided a commercially available shower unit was our best solution. We found a 30 inch shower and built the bathroom walls around it. The bathroom extends all the way from the back of the house to the front of the loft by design which has plenty of room for one person to use it at a time. We also opted not to include a bathroom sink since our kitchen is just the other side of the door. We brush our teeth and such in there. In fact the house is so small I usually find myself wandering between the closet, the kitchen and the bathroom to get cleaned up and dressed anyway.

Here are some photos of the tiny house bathroom today.


Here are the built in shelves above the toilet. We built them in to the framing of the walls. 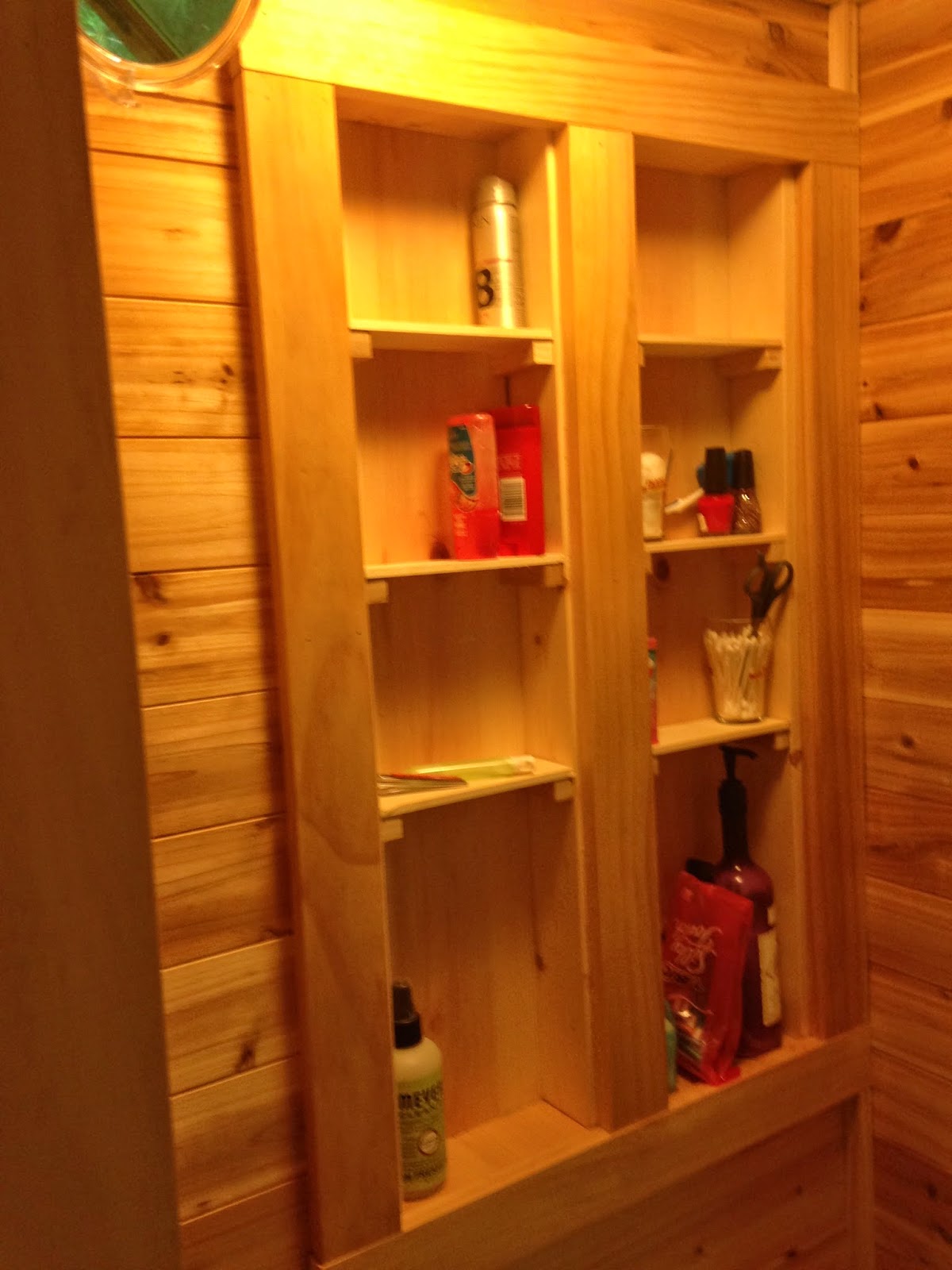 This is our dry composting, sawdust toilet. We went with the basic version straight from Joseph Jenkins' Humanure Handbook. It really isn't fancy or exciting. Also we had this plug installed in the bathroom before we built the toilet. As it turns out it is just in the way and we never use it. Oh well. 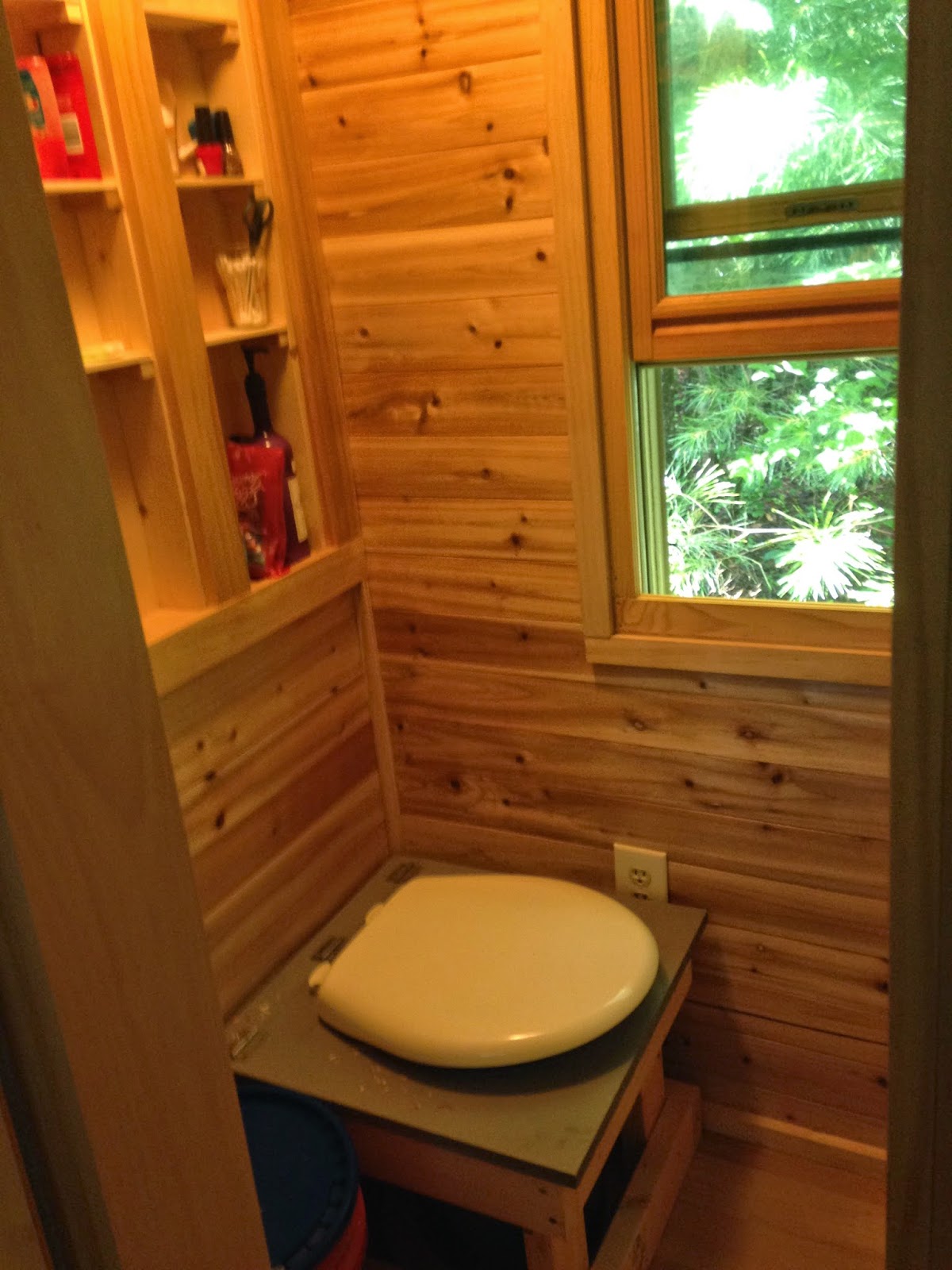 Here are the other recessed shelves as well as the mirror we have hanging on a hook. 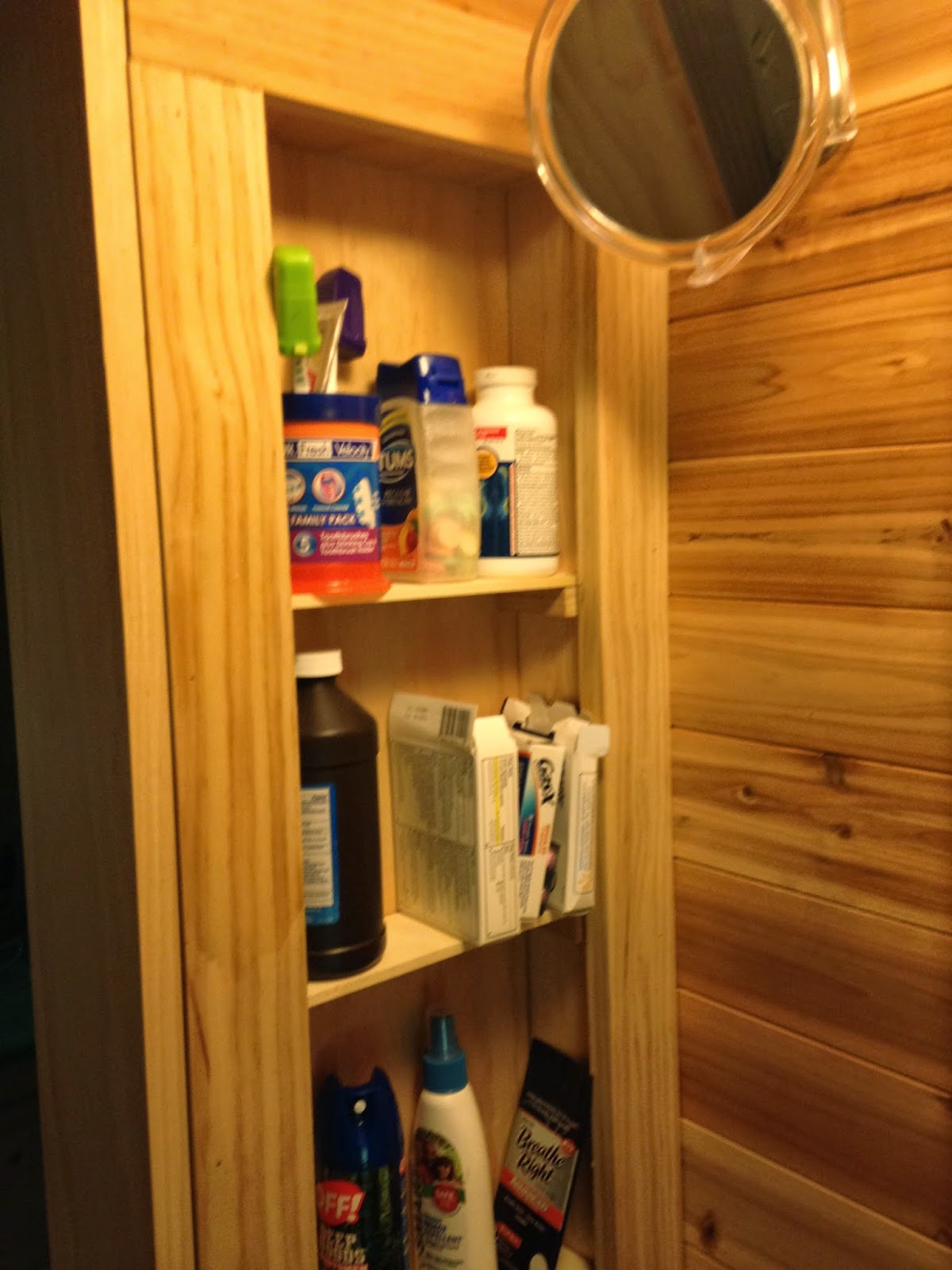 The small 30 inch shower with a pretty shower curtain. I was very happy with the way we built the surround for the shower. 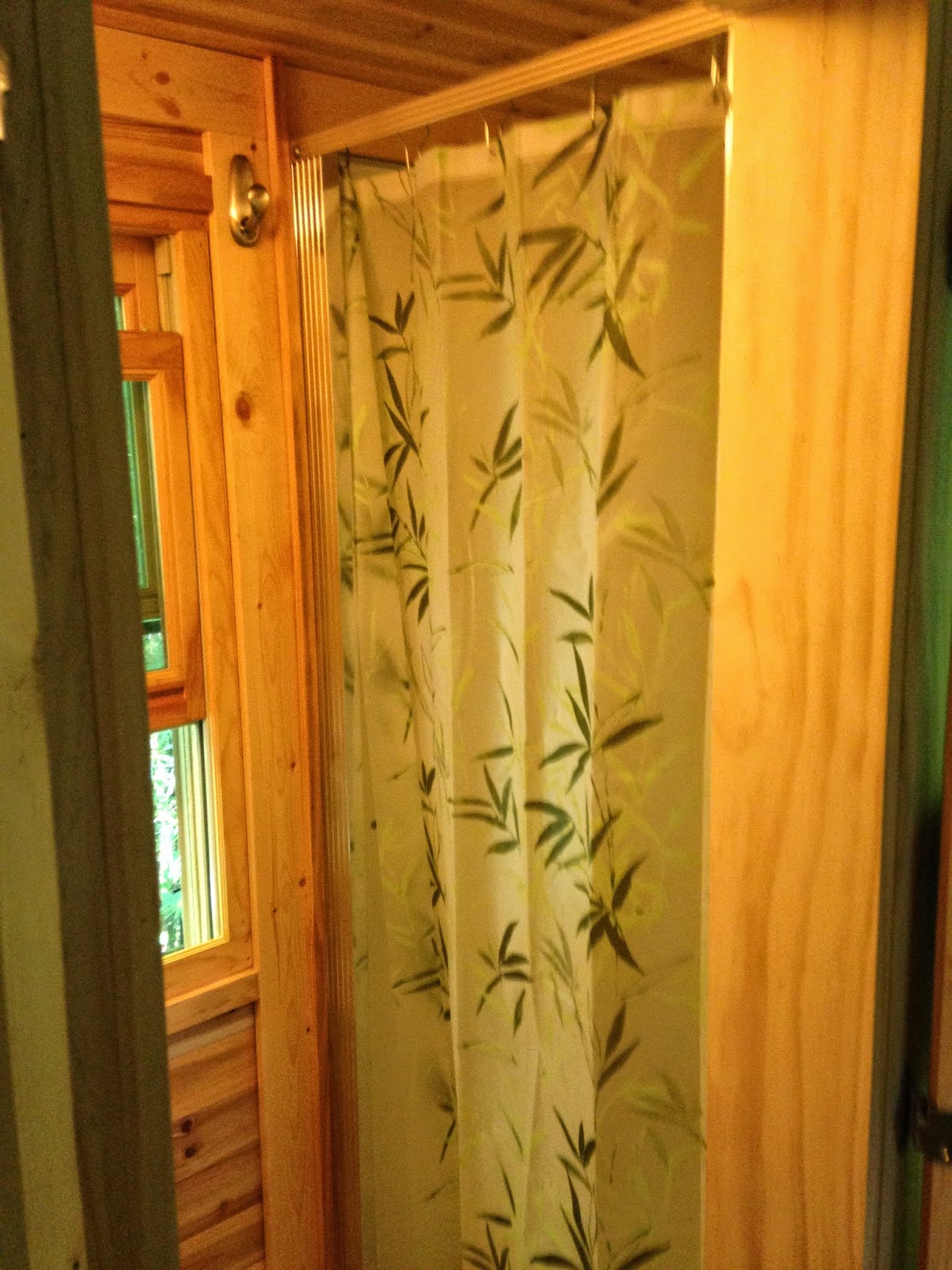 Inside the shower you can see the ceiling panels as well as the shower nozzle and hook to hold it up. As we've mentioned before we didn't plumb the bathroom and we use an air pressurized shower sprayer. 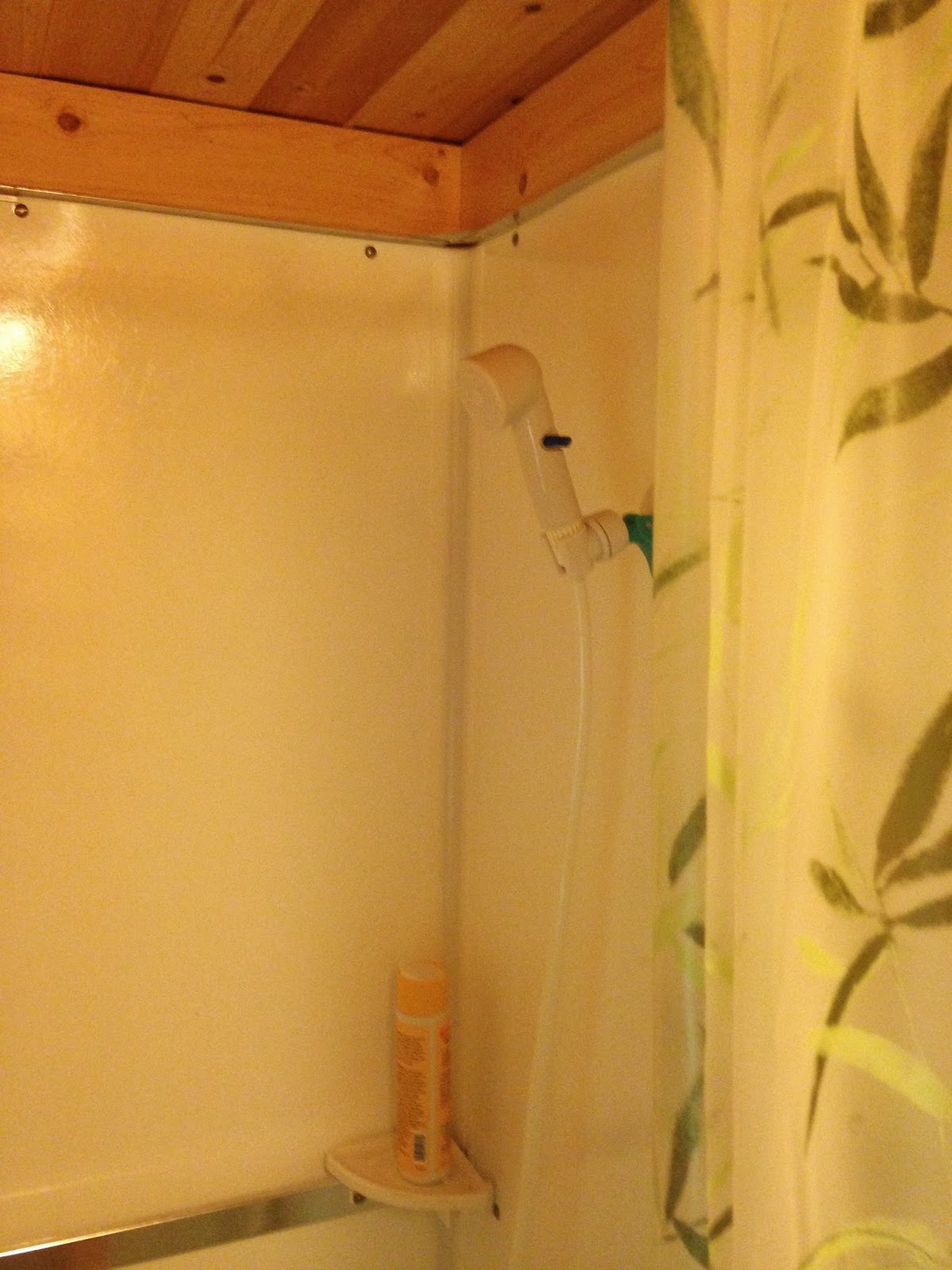 A lovely view out the window. 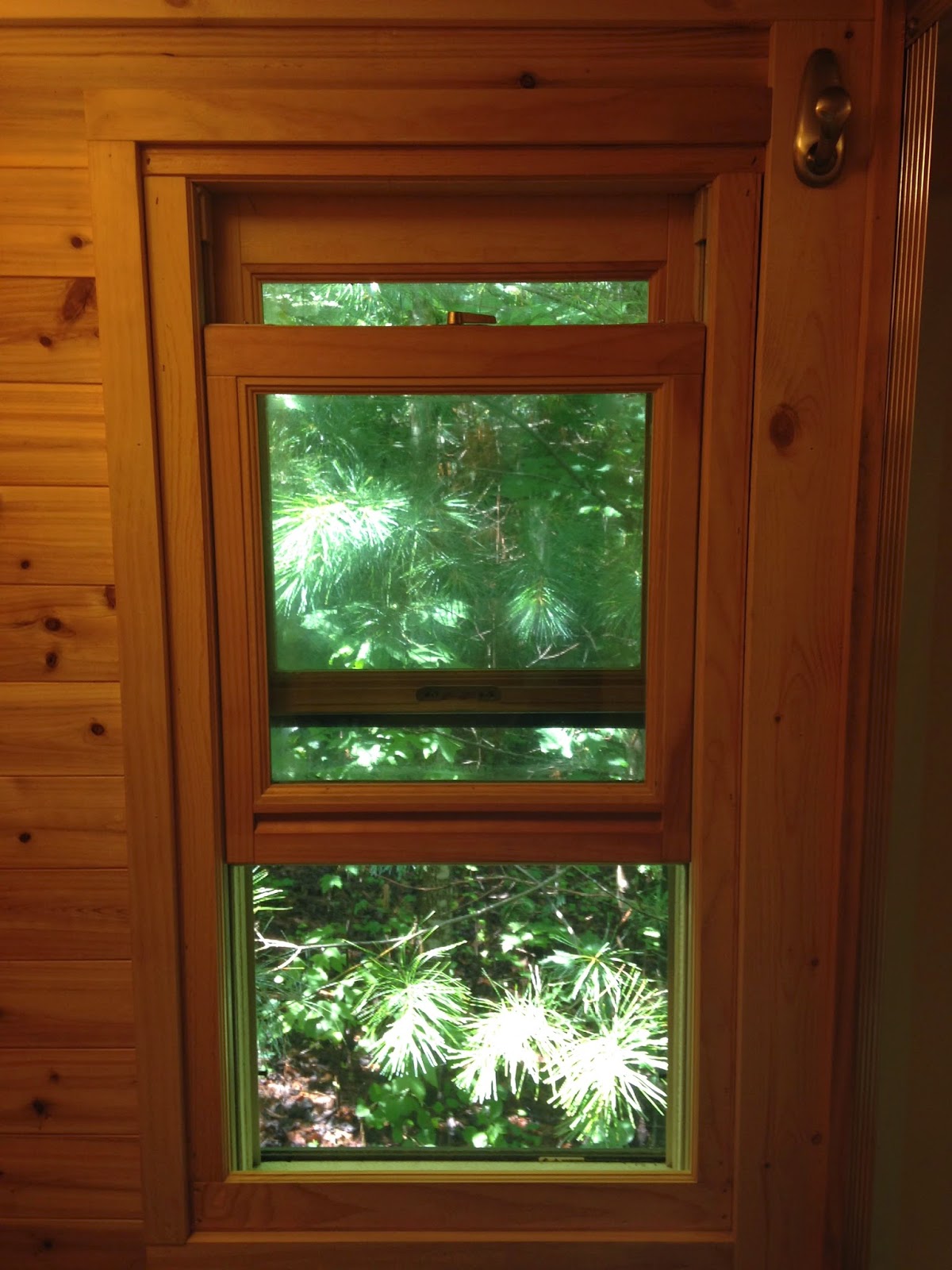 The light fixture, like all of the fixtures in our house, came from Ikea. We also used cedar tongue and groove wall panels for the bathroom. The rest of the house is pine. There wasn't a practical reason for this, just that it seemed cool to use something different in the one space that was separate. 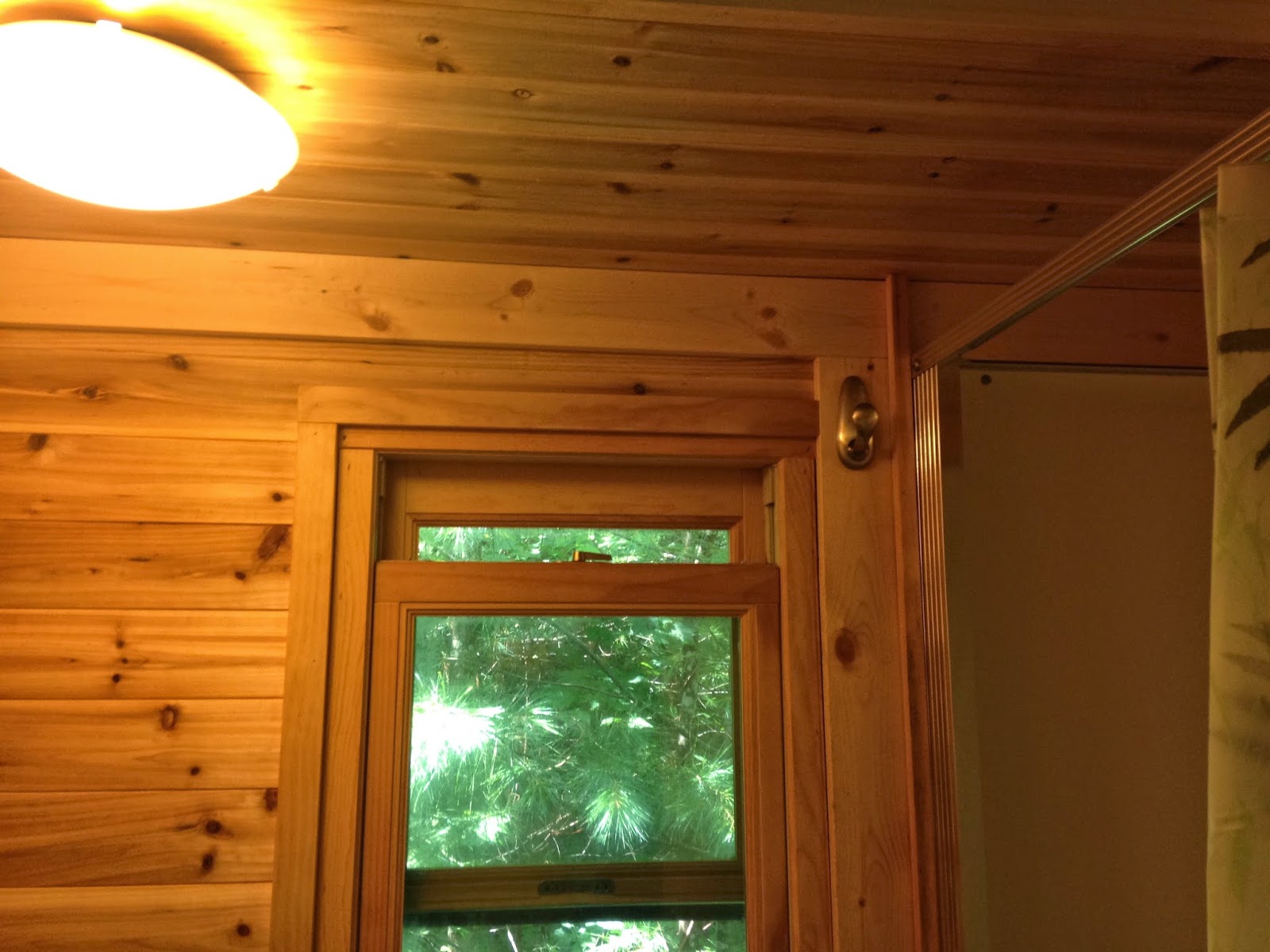 For the doors we build two half doors that meet in the middle so it is easier to get around them in the kitchen. We matched them to the kitchen cabinets. 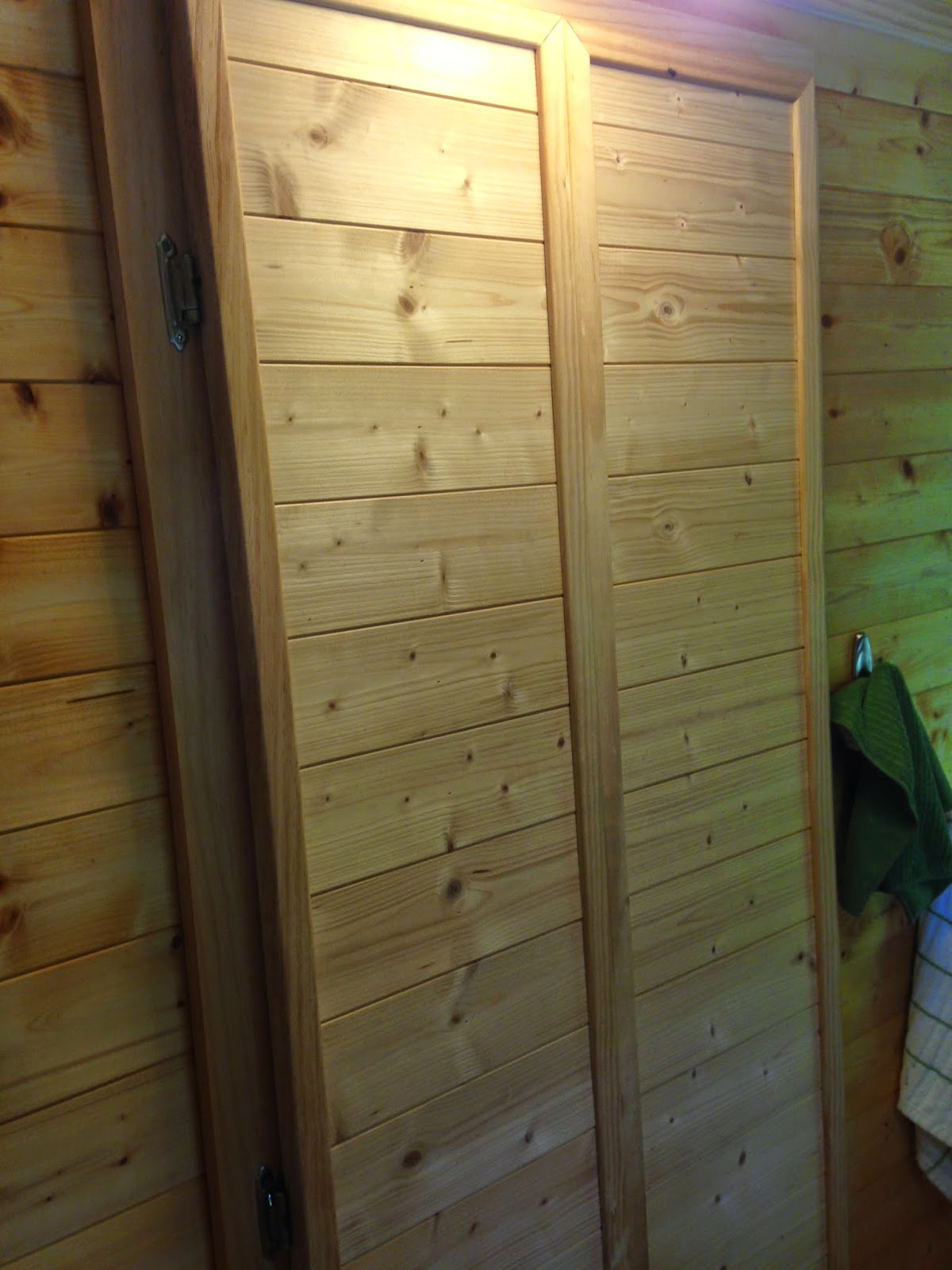 Is there anything you want to know about the bathroom in our tiny house?