Posted by Laura LaVoie on April 07, 2014
This weekend at the Tiny House Conference in Charlotte was a whirlwind. I don't know if I can possibly describe every detail that happened. It was such an amazing event! I wanted to try to recap it as much as possible and share some of the photos I took.

I had wanted to take more photos but I got so caught up in meeting new people and seeing all the houses that the camera didn't come out very often.

So without further ado: my recap of the Tiny House Conference 2014.

I decided to work for a half a day at Bar of Soap so I could keep my mind occupied before we drove out to Charlotte. Here is a photo of my lunch at BoS before we took off. I put this here because I am told that people on the internet like to see photos of other people's food. 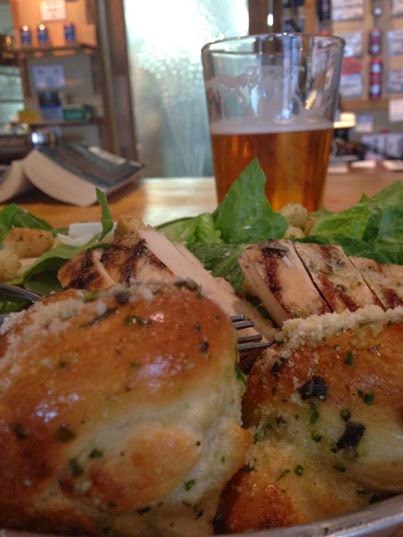 After lunch was a pretty uneventful 2 hour drive to Charlotte. There we met up with Andrew Odom and his Dad and set up camp. I think that we were the only two bloggers camping. It seemed like everyone else was staying at hotels nearby. After we got set up we chatted with some other folks who came out for the conference and then drove to downtown Charlotte for dinner. 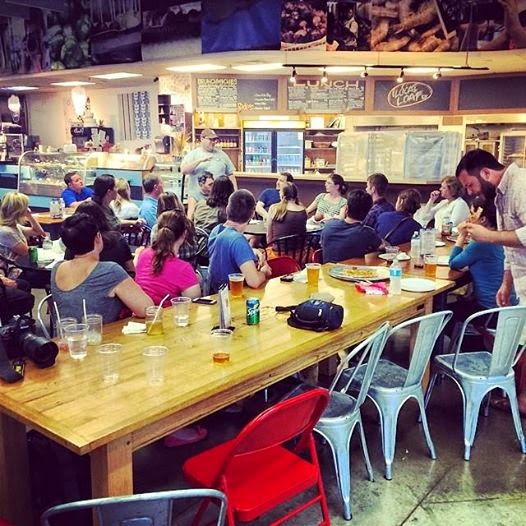 This is a photo of all the bloggers and builders listening to Ryan Mitchell, the ring leader of the conference, at the welcome dinner. I did not take this picture - Malissa Tack did. At dinner we got to meet all kinds of awesome people from the Tiny House community. There are too many to list but some folks included Suzannah and Sicily Kolbeck, and Macy Miller who just had a baby two weeks before driving from Idaho to North Carolina with the newborn and her Great Dane!

After dinner, we headed back to the campground and got settled in for the night. This is me in bed in our new tent. 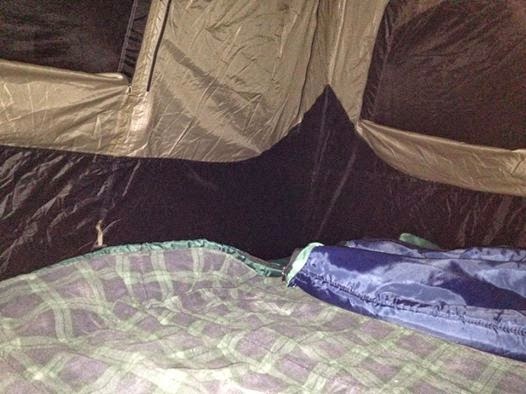 Saturday was when the magic happened. 300+ people converged on the nature preserve to listen to speakers and see tiny houses. Matt and I presented on Building Basics, which I think went pretty well. We also got to see Drew speak about tiny house utilities. That afternoon Dee Williams gave the keynote address. It was inspiring, moving, and entertaining. Here are some random photos from the day: 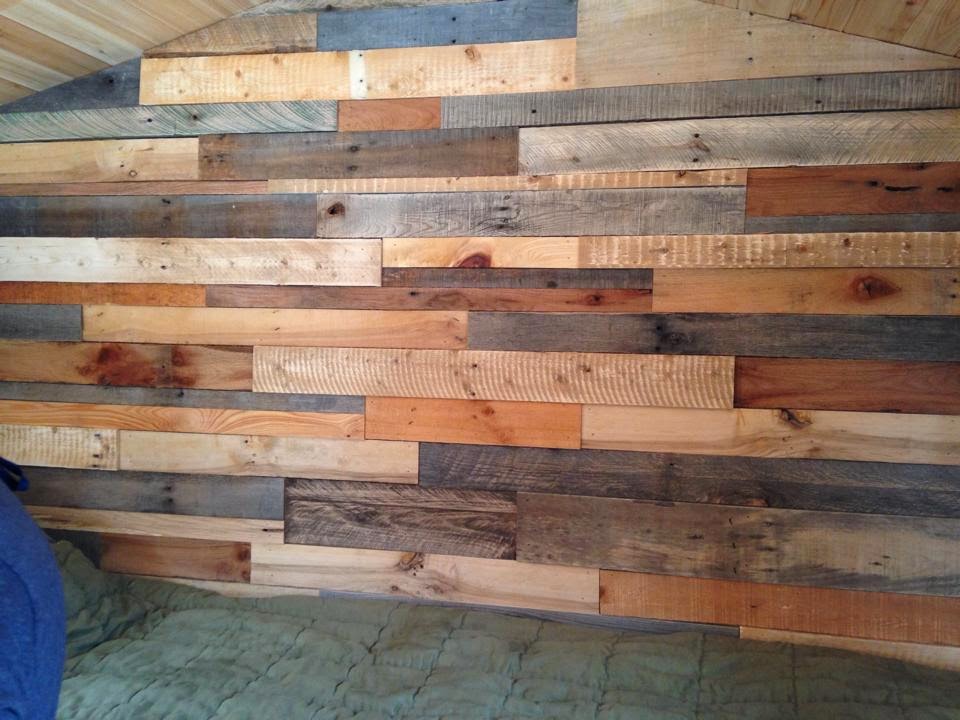 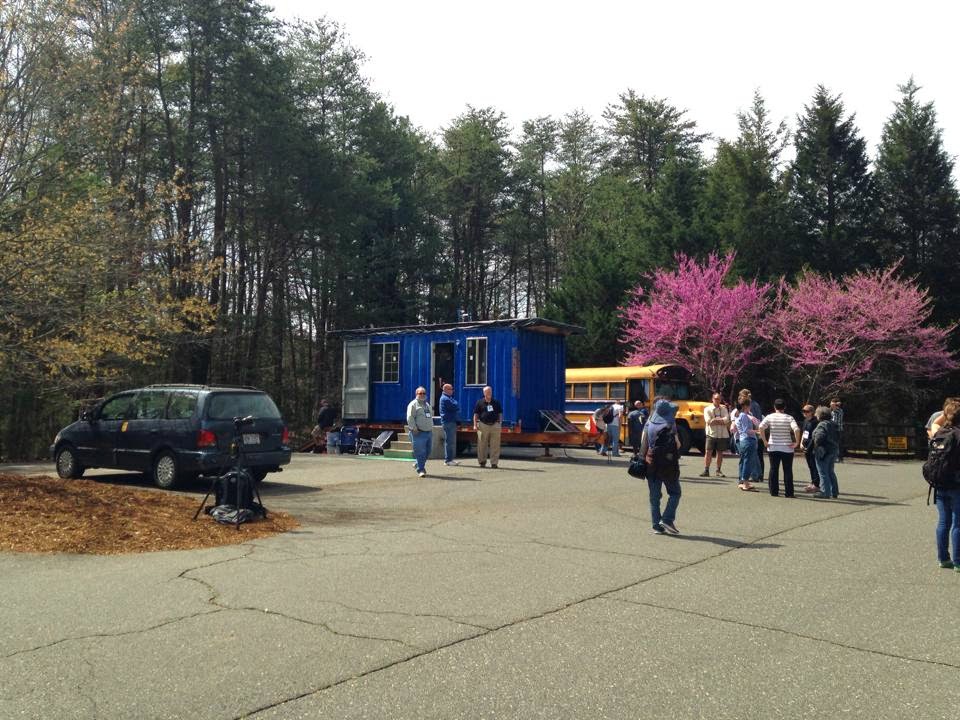 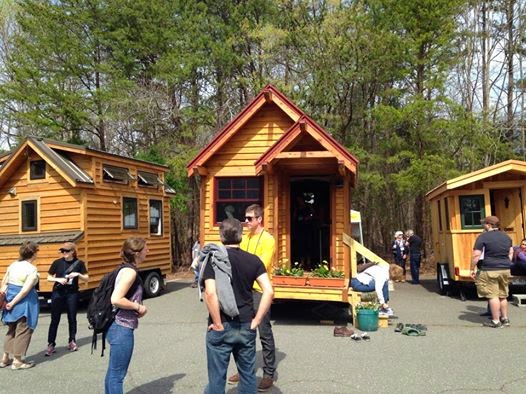 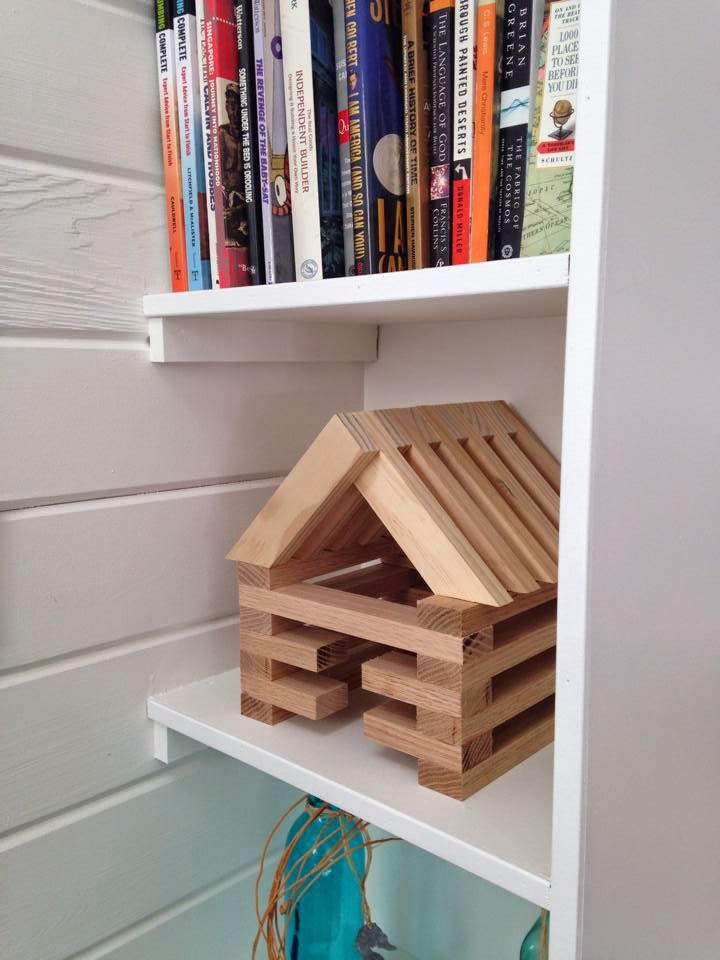 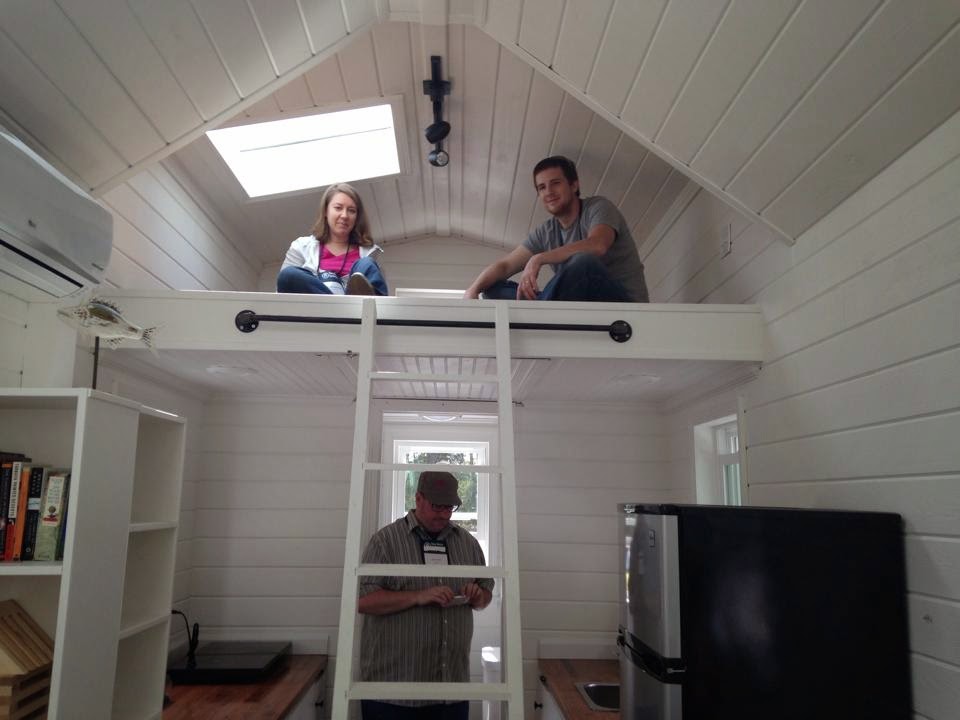 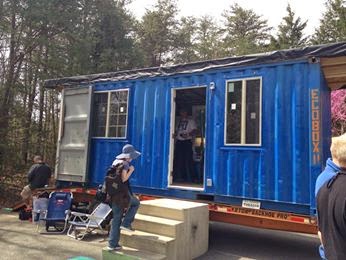 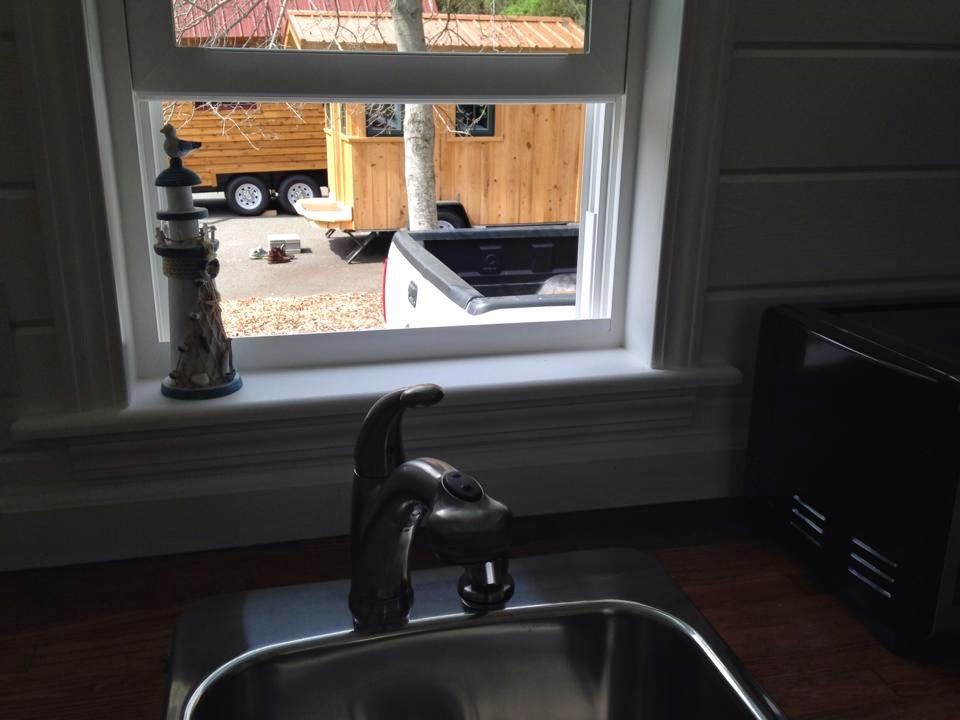 After a dinner break, Drew and I hosted the Blogger and Builder Panel/r(E)vo Convo Podcast with special guest Ryan Mitchell and Sicily Kolbeck - and, of course, the attendees of the conference. We recorded the session and will be putting it out as a podcast soon. I had so much fun!  (here is another photo by Malissa Tack) 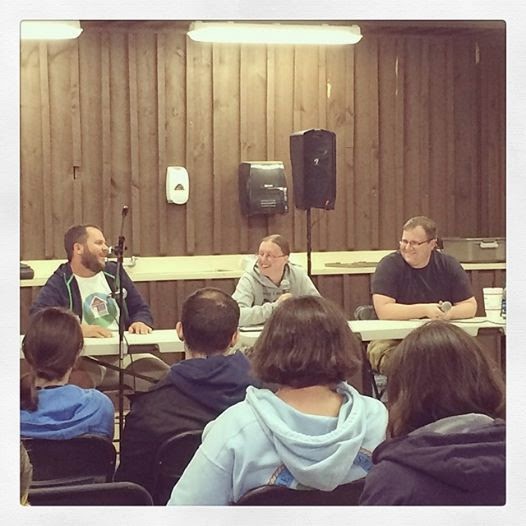 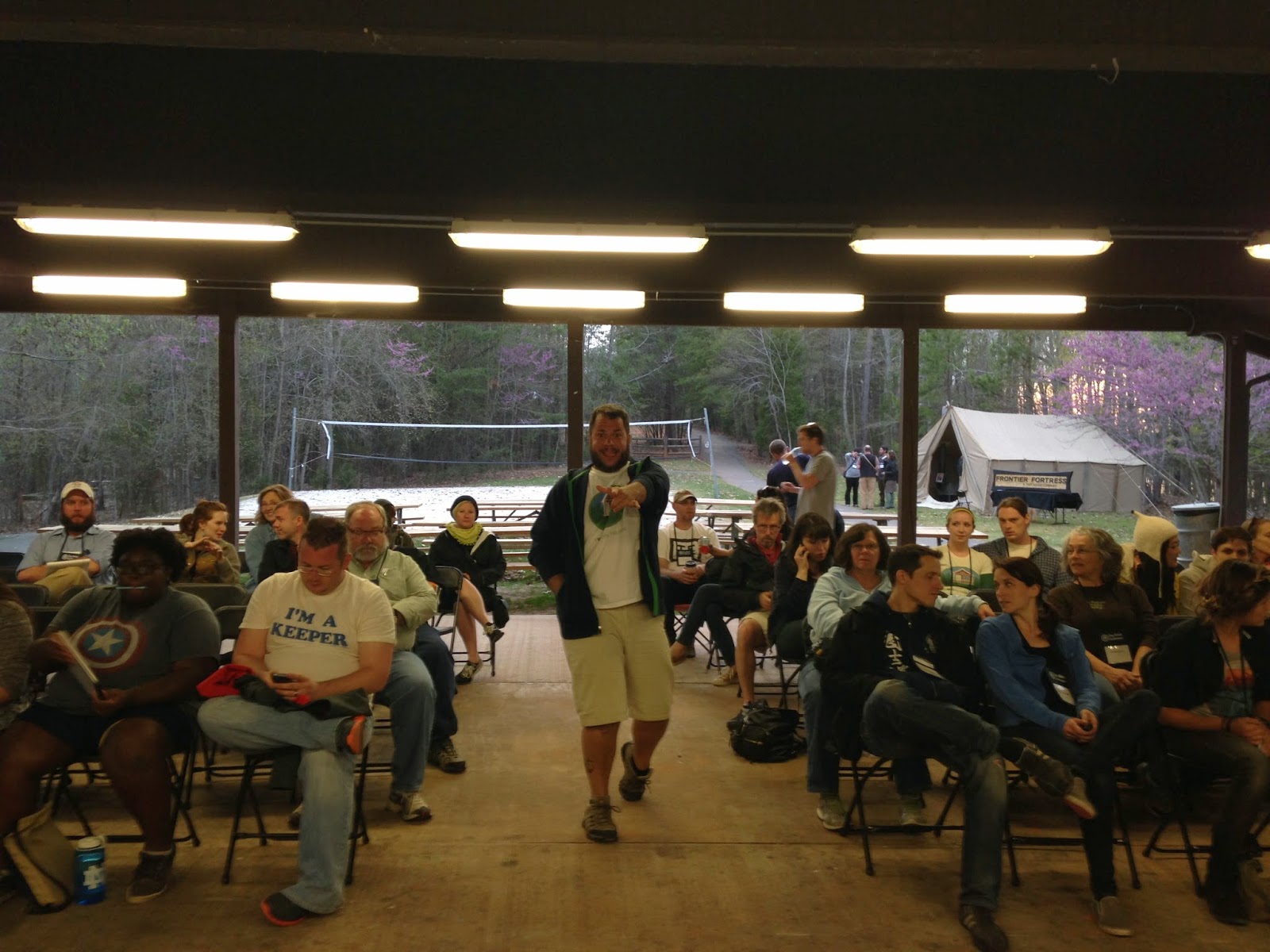 Here is Drew pumping up the audience as we got ready to record.

Saturday night had a delightful bonfire and many people getting to know one another. It was a great time.

Sunday featured more workshops. Matt and I spoke about Off the Grid Living. I think that went quite well.

After the workshops and lunch, we packed up our campsite and got ready to head back to Asheville. We said goodbye to all of our friend, old and new. Some connections were made. We even met a few people who live in the Asheville are who we hope we will see again soon!

I believe there will be a Tiny House Conference in 2015 and I'll be sure to share details when I have them.

If you were at the Tiny House Conference I'd love to connect with you online. You can find me on Facebook!