Posted by Laura LaVoie on April 04, 2013
My sister, brother-in-law, and two nephews were here to visit over Easter weekend on their way to a spring break destination on the Carolina coast.

On Easter morning, before they started the final leg of their vacation drive, we hosted them for brunch. We made many delicious things including Pineapple Dip (mix pineapple flavored cream cheese with marshmallow fluff and serve with fresh pineapple - yum) and chocolate croissants (home made - use squares of puff pastry, add a Hershey kiss in the middle, fold and seal and bake until golden brown and delicious.)

We also made bacon that we got at the local butcher shop. That place is delicious. Their bacon is house smoked and we order it extra thick because we really love thick bacon. We had quite a bit left over after brunch (we kind of over bought the bacon) so Matt suggested making BLTs with it this week.

But then he suggested using avocado and cheddar cheese rather than lettuce and tomato. I was sold.

The result was one of the most delicious sandwiches I have ever tasted.

We fried up the bacon and then put it on a hoagie bun along with slices of avocado and slices of cheese. We broiled the resulting stack open-faced style until the cheese was melty. Then we put some mayo on the other half of the hoagie roll and pressed the whole thing together. It was so good. 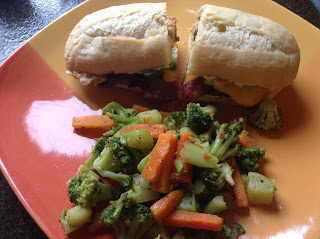 Don't mind the mushy vegetables, they were certainly not the star of this show.