Posted by Laura LaVoie on March 11, 2013
I was going through my photos yesterday to finish adding some things to my book.

No, this post isn't exactly about the book, but I'll share some info on that as well.

What this post is about is this photo, The Accidental Pumpkin. 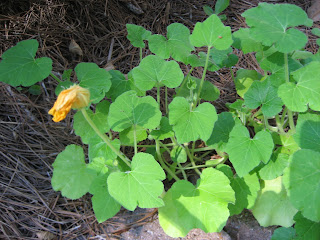 That, my friends, is pumpkin blossom that grew up in our suburban flower bed in June of 2008.

We did not plant this pumpkin. Well, not on purpose anyway. 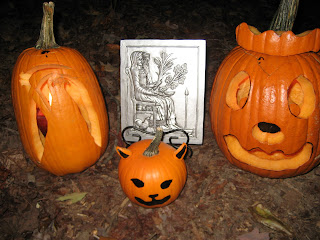 This was the reason a pumpkin vine started growing under our hydrangeas that year. Matt and I carve pumpkins for Halloween every year. That year I carved the grim reaper and Matt carved that silly pumpkin king face. We also usually make a pumpkin for Piglet. This year we didn't feel like carving it so we took a sharpie to a pie pumpkin and made little cat ears out of the scraps from our larger pumpkin.


These pumpkins sat on our front porch through Halloween. At some point, just after Halloween, the little cat pumpkin fell into our flowerbed and rolled under the hydrangea. While it wouldn't have been a problem to pick it up we just never bothered. And the pumpkin did what pumpkins do if left to their own devices - it returned to the earth.

I had completely forgotten about it by the time summer rolled around and the little pumpkin blossom bloomed on the little vine in our flowerbed. We called it our Accidental Pumpkin.

As you might imagine, under a hydrangea is not the ideal spot for a pumpkin vine. I wish we could have transplanted it to see what would have happened.

I don't know if this story is a metaphor for anything. Maybe that sometimes seeds you planted have unexpected results. Or maybe that sometimes you don't even mean to plant particular seeds but they still grow whether you want them to or not. I guess I never expected the seeds of the tiny house to become a website or a book, but they have and now I need to cultivate those things. I can't just ignore them and see what happens.

I came across this forgotten picture when I was going through photos for my book, 120 Ideas for Tiny Living. I was (AM) hoping to get the book out by March 29th, which is my 38th birthday. Looking at what I have left to do I'm not sure that will happen. But it won't be much later than that - first week or so of April. I've been formatting it and saw the layout and I am very pleased with it. I hope you are too. I'll keep you updated on the release date and the ways you can purchase it. I don't even know the cost yet but I don't want it to be too much for the eBook version.Keep watching this space for more concrete information. 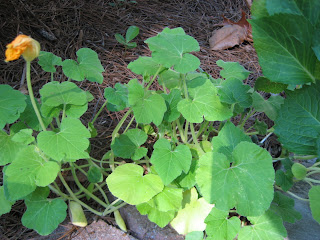