Welcome to "Winter in 180 Square Feet"

Posted by Laura LaVoie on November 04, 2012
Well, we have arrived in the Mitten State - for better or worse.

Matt and I drove separately so we could each have a car since we'll be here for two months. I had Piglet in the Element with me and she was a super good girl. She mainly slept.

On the way, I was listening to my iPod on shuffle and thinking about spending the holidays here with friends and family. Being able to work from anywhere in the world certainly has its perks - even if we do use that freedom to vacation in Detroit of all places.

I already miss the tiny house and my Mountains. Michigan is very flat.

While I was driving, this song came up on my pod and it made me happy to be heading north for the winter. Being from south east Michigan will always be a part of my DNA. It made me who I am. For whatever it is worth, I have a connection to this place that I can't ignore. I also wouldn't call myself a Kid Rock fan, but this song is beautiful - especially this acoustic version.

But then it happened. We hit the Michigan boarder and were both stopped in the traffic jam of all traffic jams. Matt was ahead of me and called to let me know what was happening. He was stuck in it for over an hour when he decided to get off at an exit and try to make his way around it. I stayed with it thinking it couldn't last forever. After a couple of hours, I learned that they had shut the entire expressway down and were routing people off on an exit that led to a two lane gravel road and snaked about 11 miles back to the I75 only two exits north of where we got off in the first place.

It wasn't until this morning that I learned the cause was a fatal semi accident and not just construction traffic. Certainly makes you put things in perspective. The 14 hour drive wasn't so bad - at least I am here safe and sound.

So, welcome to our Winter in 180 Square Feet. That is an approximate size - we didn't measure. But the room is pretty square. We are staying with Matt's mom. The room we're in doesn't have its own bathroom or kitchen, but we obviously have access to the ones in the apartment. In the room, though, we have a make-shift desk (a board over some drawer units) and our inflatable but extremely comfortable bed. That is where Piglet is right now. She doesn't have any adjustment period any more when we take her strange places. She just goes with it. 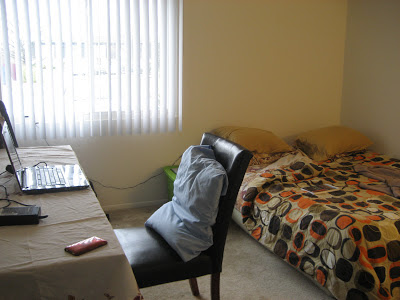