Posted by Laura LaVoie on October 02, 2012
I am convinced that normal homeowners do not get excited about such little things. But I find that a little inexpensive splash of color in the tiny house is all I need to brighten my day.

It was on clearance at some store or another and it was cheerfully green so we snagged it. The one we had in there before was the cheap little one that came with the shower and it was solid white. This one lets in a lot of light when you're in the shower, which the other one did not. 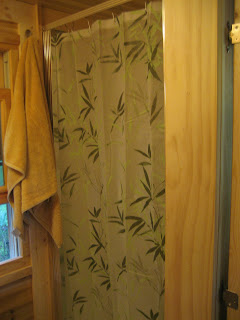 In other news, the visit with my mom and my aunt was quite fun. We took them all over Western North Carolina. From the tiny house, to Mount Mitchell and beyond by way of the Blue Ridge Parkway. Then back in to Asheville to walk around the city we love so much.
decorating green shower shower curtain simple pleasures