Posted by Laura LaVoie on October 22, 2012
Just a quick photo from the Lake Eden Arts Festival this weekend. It is a beautiful camping festival with great music, good food, and delicious beer smack in the middle of the mountains near Black Mountain, NC. I am now thinking about how we can go back to camp next year. They hold it in May and October every year. 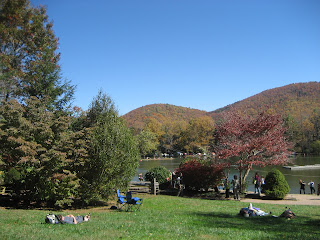 I absolutely love camping festivals. Here is a link to a post I did for Tiny House Talk earlier this year just after we returned from a week long camping festival in Illinois.

Also, I was combing through some old LiveJournal posts - which was the ancestor of this very blog. I came across the one about the bat. It was a fan favorite at the time so I thought I would share it with you all. I can't say any part of this experience has been boring, that is for sure.

We are up in Asheville. We got here last night, after leaving work about 4:30. We set up camp and watched an episode of 30 Days on Hulu and then settled in for the night.

It was about midnight or so when things got a little surreal. I heard a noise. This is not unusual when you sleep in a barn. I poked Matt and asked him what it was. He said it was just a bug and go to sleep. A few minutes later, we heard it again. Finally, Matt turned on his flashlight. "BAT!" he shouted. Sure enough, stuck in the little barn room with us was a little bat. Poor thing was scared out of his wits. We opened the two doors in the barn room to try to shoo him out. After a few minutes, we couldn't find him anywhere so we decided he must have flow out and we went back to bed. At about 1 am I heard the flappy wing noise again and we turned the flashlight back on and there he was again, flying around the little room. He would land every now and then and we could get a good look at him. He was so cute, but he was so scared - he was shaking and trying to look vicious. Armed with a foam pirate sword, Matt worked on trying to get him to fly out of the room. Eventually the poor little thing did and we went to sleep. My only regret was that I didn't get a picture of the little guy when he was not in flight.

Then, just this morning we got up and went outside to eat breakfast. We kept hearing this banging sound that was way to close to be the neighbors. Matt walked toward the shower platform where the noise was coming from and then told me to come see. Stuck on the metal grate that covered the spring reservoir there was a little box turtle. His back foot was stuck in the grate and he was hanging over the edge and the noise we were hearing was him banging into the metal basin. Matt reached to get him and he pulled himself tight into his shell. Then Matt carried him over to a flat part of land and set him back down. I went back over a few minutes later to take a photo and he was gone. A little bit after that, we spotted him ambling down the driveway and into the strawberry plants. I got the camera and took a few photos.

This is seriously the reason I love camping.