The Folk N' Ale and The Tiny Table: Baconalia

Posted by Laura LaVoie on August 08, 2012
A couple of Christmases ago we were at a friend's house for a party. He had set up his basement like a little pub and everyone who could play music was welcome to bring their guitar. The rest of us were able to sit at the tables and enjoy a beer and the music. It was great. We began referring to the basement as "The Folk N' Ale."

For Matt's Birthday, I bought him a sign that said Folk N' Ale so we could have one too.

We decided to build ours as a deck behind the Tiny House. Matt just knocked out the construction of the 12X12 deck in about a week. And yes, for the record that does mean the deck is bigger than the house. 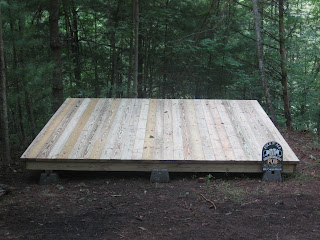 
Last night, to celebrate the opening of the Folk N' Ale, Matt and I had our own Baconalia. What is that? It is something we did at the camping festival we went to earlier this summer. While we were there, toward the end of the festival, we realized that we had brought two pounds of bacon that were going to go to waste. Rather than throwing it away, we cooked it. The smell of frying bacon attracted our campmates and next thing you know the meat eaters were getting drunk on bacon. But with two pounds of bacon you create a lot of bacon grease. We realized we had potatoes! We sliced them up and threw them in the bacon grease with a spoonful of minced garlic and VEE-OLA, bacon fried potatoes! I can feel my arteries clogging now. Delicious. Matt and I did not make two pounds of bacon for just the two of us, though. (PS, Baconalia is a play on the term Bacchanalia, in case you were wondering).

And Matt played some music. 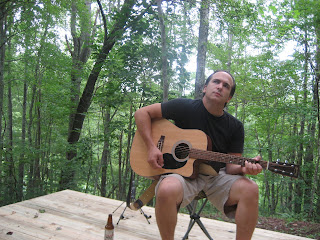 We can't wait to have some friends up to enjoy the deck and the gorgeous woods with us.
bacon building cooking deck deck block folk n ale music the tiny table