Posted by Laura LaVoie on July 10, 2012
As Matt to astutely pointed out, most people build basements before they build the rest of the house. But we don't do anything according to convention. Instead, we built a "basement" yesterday.

As we did the construction on the house, we took to shoving things underneath to keep out of the weather and out of our way. Now that we are living in the house and all major building is complete, we wanted to clean out under there. Some of the things has been there for almost three years so we didn't quite know what we would find. Luckily, as we pulled everything out from under the house we didn't find any snakes living there. That's always a bonus.

Then Matt had an idea of using some of the scrap lumber to build platforms under the house to store things neatly. So, he got to work. 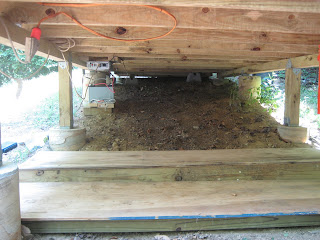 Here you can see the first two levels. We also attached the inverter to the under side of the house. Matt would go on to build a total of 4 levels of storage under the house. Here we can keep things like our camp chairs and tools we still need. 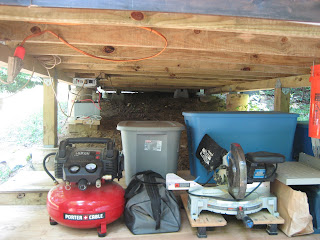 Some of these things will also eventually be able to be moved out - like the air compressor and accessories. But for now it'll be neatly placed under the house.

I had some small concern about drainage but there are plenty of channels for water to find its way out from under the boards. We used scrap pressure treated lumber which we couldn't really dispose of anyway so helped us reuse a lot of our waste materials.
basement organization shed storage tools