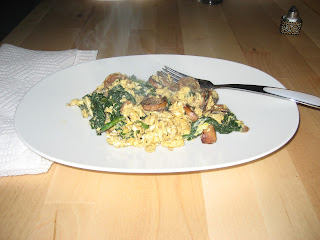 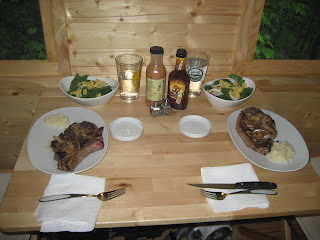 The other day I had a little Tiny House writer's block and I put the question out to my Facebook page. I wanted to know what you, my readers, wanted to hear about. I got a lot of great questions, some of which are pretty complex and may require some further research. But I thought I would talk about one question here today. What is your kitchen like? Everything that we use in our kitchen is portable or temporary. For example; we didn't build in a stove or oven unit. We use portable butane burners. We have two but unless we are making something that requires two burners, we typically only have one out on the counter at  a time. We have the L shaped counter and cabinets beneath. Under the smaller cabinets we store all of our utensils. Under one half of the larger cabinet we store our food. The other half holds a cooler so we can keep some foods cool, but we rarely ever used it. The plates and glasses are stored on the shelves above the counter.  Also in our kit