Posted by Laura M. LaVoie on April 09, 2012
Piglet is not actually a part of this post. That is because we postponed her first trip up.  We will be going back this weekend with Piglet.  I have promised photos of Piglet in the tiny house. Since I wasn't able to do that this week, hopefully this photo can tide you over.

The other thing he did while he was there was make the futon work for us. The frame of the tiny futon (or FuTeeny) did not work for the space at all, but with the way it was constructed it would be easy to modify. So, he built a frame out of 2x4s instead.  The best part about this is we can use the space underneath it and behind it to store things. 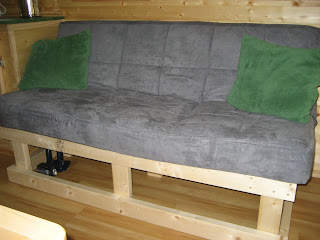 And here is a view of more of the living space. 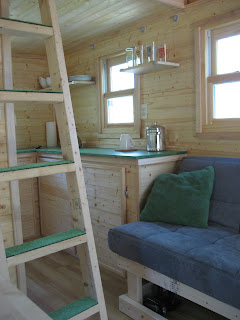 Also while we were up in Asheville we had a chance to hang out with some friends from college.  One of our friends still lives in Michigan and we've been in touch on and off since college.  The other friend we haven't seen since before we move to Georgia. It was at a friend's wedding - those friends now have 3 kids! She happens to live only an hour away from Asheville. We took them to Jack of the Wood, the most authentically Asheville place we could think of.  We spent hours talking and catching up and it was great fun.

We will be taking Piglet up just for the weekend so she can get use to the space.  That way we can see what she needs as far as a way to get up to the loft.

We'll be there permanently by mid-May. We have a lot of work to do still in Atlanta to get ready but we are so excited about this transition. Then, everything changes.