Finally, We Sleep in the Tiny House

Posted by Laura M. LaVoie on March 04, 2012
Though the weather progressively got colder and wetter throughout the week, culminating in thunderstorms on Friday night, we decided to stay at the tiny house for the first time of this year.

Because it was going to be chilly, we decided we didn't want to do a lot of work outside. That ruled out anything where we needed to set up the saw and cut any wood.  I had some work to do on the computer anyway so we though the best project was finishing the floor in the bathroom. It is such a tiny space that two of us couldn't fit in there at once anyway.  So I set up my laptop on the table and worked for a few hours while Matt cut and fit the floor into the teeny bathroom.  I failed to get photos of the bathroom floor, but it is the same as the rest of the floor anyway.

Once we were both done with our work, we decided to create a storage landscape in our small storage loft.  We had recently bought some things at The Container Store that we thought would be a great fit for the loft and not only be functional but also look great.  I absolutely love the way it turned out.  We added the brushed chrome fan and the LED candles to the storage-scape and took some photos. 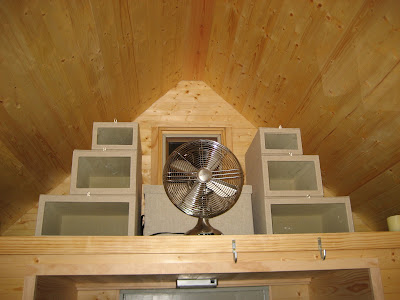 Now we just need things to put in them!

After that, we went out to dinner.  We came back and set the fire brazier up behind the house.  We got out our camp chairs and a couple of beers and built a fire. Matt pulled out his guitar and played me some music.  It was pretty cold out - below 40 degrees - but with the fire it was lovely.  Eventually we went back inside.  I was ready for bed by 10pm, but Matt stayed up and played Star Wars: The Old Republic online with some friends.  We had the indoor propane heater on to make the house nice and toasty. It stayed comfortably warm in the loft all night and into the morning.  The little house is well insulated and heat does rise after all. When we did get back down from the loft in the morning to make coffee and hot cocoa we did have to turn the heater back on, but it heated up pretty quickly. We had our breakfast, got ready for the day, cleaned up the house, and headed back down the hill to the car to go back to Atlanta.

We will be back up to the tiny house for a four day weekend in just a couple of weeks.  We expect to get quite a lot done that weekend.  It is such an incredible feeling to see something you've been working on for so long finally come together.  When the project is as big as building a house you have to take it step by step and when we were building the foundation I don't know that we fully realized how awesome this place would eventually be.
bathroom bed campfire fire floors guitar music sleeping storage