Posted by Laura M. LaVoie on November 21, 2011
Well, now it is just after 5am and I am wide awake. I have to go to work today, so I know I'll be pretty exhausted by this evening, But I'll survive. It is only a three day work week anyway and I can fake anything for three days.


Day three began with Ellen doing an Art Therapy workshop for about 30 people. Most of them were Zulu counselors who work with the children in the area, so there was a language barrier. Matt and I didn't go to the workshop, but I read Priscilla's recap and it sounded like it went very well. Ellen did a lot of hands on work and the experience superseded the communications challenges.


Matt and I spent the morning being somewhat lazy. We slept in until 10am, which was really our body clocks trying to readjust.  We watched some TV shows we had loaded on our computer and went up onto the roof top deck at our flat to look at the ocean. 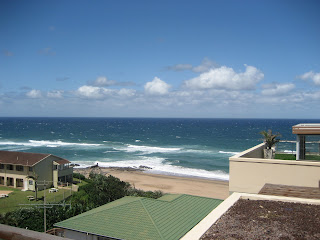 We also saw monkeys. There was even one on our patio, but I startled him at the same time he startled me and he ran off. I couldn't get a good photo of the troop, but if you squint you can see there are monkeys in this photo. They ranged in size from baby to really freaking huge. 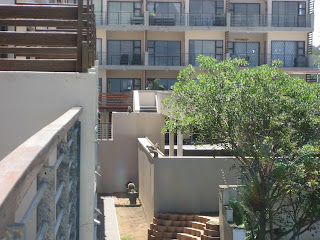 At about 1:30, Austin came back from some appointments he had in the morning and picked us up to go to the hardware store. We wanted to get an idea of how much some things cost but we also wanted to get some supplies to make a small water heater that Matt had designed. Also, out at Mildred's the day before we noticed that some of the windows had been broke (little boys accidentally break windows in many cultures). Matt had an idea to get plexiglass to replace them since that wouldn't get broken so easily. When we got to the hardware store we talked to a guy there who said the would have to order plexiglass and he would call us back with the price. It turned out to be expensive, but with the size of the panel and the size of Mildred's windows we could get six replacement windows out of one sheet.  We went ahead and ordered the plexi and Austin said he would install the windows when it came in.


We got all the things we needed for the water heater and we went to Mildred's to drop off some food that was left over from lunch at the training.  Once we did that, we drove up to the hall where the training was finishing up to pick up our group.


It was still pretty early in the day, so when we got back to the flat we took another walk on the beach and enjoyed the sun. Then we went out to dinner where I enjoyed a fantastic braised lamb in a red wine sauce and some very delightful localish beers.  When we got back from dinner, we went up on to the roof top deck and talked for hours.  It was a gorgeous night as we watched the moon rise over the ocean.


The next day, Day 4, began early as we got up to go out to Mildred's to dig soil samples. Most of the kids were in school so we weren't able to teach them how to play NFL football, which had been in our original plan (Tammy is a Cowboys fan, and of course I am a Detroit Lions fan). We walked out on to the land that is being transferred over to the Zulu Orphan Alliance so we could dig some soil samples.  The point of this exercise is to determine the make up of the soil in the area to see how well it would work in the earth bags. The best is a mix of soil and clay. We weren't expecting what we found. As we dug down in to the soil, we unearthed thick black solid clay. 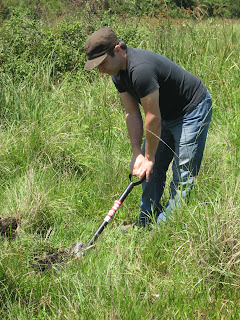 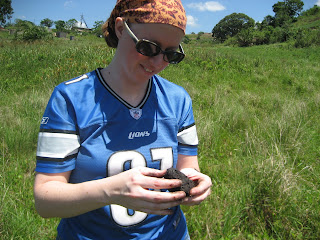 We put the black clay into one jar and then jogged over to a small patch of someone else's land to get a sample of the red soil that we had seen around as well.  Later you will see the results of these samples.


Mildred's house in in the townships, which are typically places that feel less safe than areas near the city. However, I felt very safe and secure at Mildred's house. I think this has everything to do with Mildred. She is very well respected in the community and I could instantly see why. She was so kind and so warm when she first met us and I learned throughout the week that she possesses a strength that I wish I could even carry a fraction of.  The site where we will eventually build this shelter may be one of the most beautiful places on earth and that will be integral in creating a safe and comfortable space for the children.  We will leave the tree and build the shelter nearby, eventually building several small buildings. 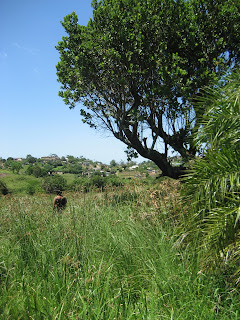 While we were digging in the dirt and talking photos of the eventual building site, Ellen and Tammy were in the house doing art with the littlest kids who weren't in school.  There were also a couple of girls who didn't go to school and Ellen taught them to finger knit.

Also, while we were there we spray painted the two bottles black that would be used for the water heater. Then we let them dry before leaving. 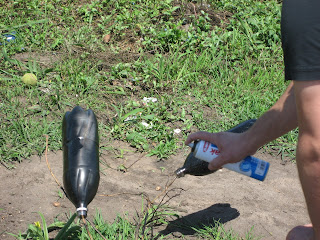 It was still early in the day when we left Mildred's so we went back to the flat to get cleaned up (I was covered in black clay, after all) and then drove down the coast to a place called Croc World.  I took a lot of pictures and I'll share a few. However, the one photo I didn't have was a Green Mamba we saw that was not in an enclosure. We just looked up into the trees and saw him climbing overhead.  We quickly left that area. 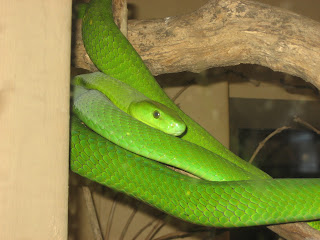 Here is a mamba in an enclosure. 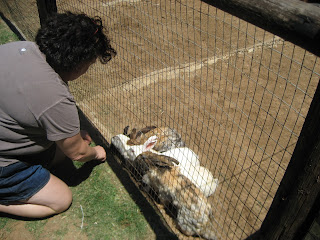 Here is Ellen the Bunny Whisperer at the children's farm. She rescues bunnies at home. They seemed to know she was a friend. 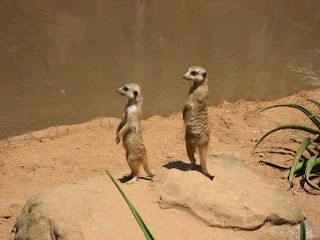 The meerkats were my favorites. They were so playful. 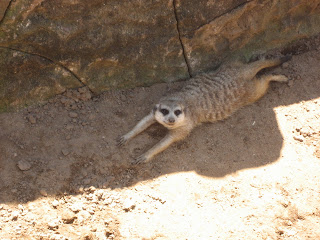 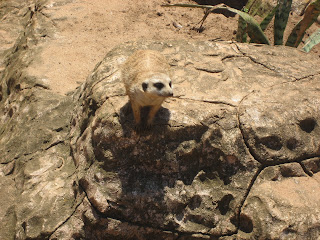 This little guy kept going for an itch by his tail and would fall off the rocks. Repeatedly. It was hilarious to watch.

We had lunch at the restaurant at Croc World and sat out on the deck to eat. There we got to see two whales in the ocean, close enough that we really didn't need binoculars.  That was pretty awesome.

On the way home, we stopped to get dinner. Austin was going to braai for us. We got some boerewors sausage and a type of rashers which is like bacon but more like what wold happen if bacon and spare ribs had a delicious baby.  These rashers had a sweet honey barbecue glaze on them and they were incredible.  They also made an incredible garlic bread to go with them. We sat out on Austin and Priscilla's deck and ate them. I was so full, but I really wanted more.

After dinner, it started to rain so we went inside and talked about what we needed to do to make this building happen.  And that really comes down to money. Money to help feed the kids and money to build this shelter. We need to generate a pretty large sum before we can even think about breaking ground.

There is a lot more. But, I have to start getting ready for my first day back at work now.  Keep checking back for more installments.