Posted by Laura M. LaVoie on November 23, 2011
It is strange to me that the last two days in South Africa were more of a blur than the first five.

On Thursday (I think it was Thursday) we went out to Mildred's in the morning to drop off some things and to pick her up. We stopped to pick up things to make dinner, which Matt and I were planning to do. We picked up Priscilla's daughter after her exams at school and drove up to the mountains.We stopped at a little shopping village and walked around.

Then we stopped at the house of Priscilla's daughter's birth mom.  That is a pretty incredible story, but really not mine to tell. But what I will say is that girl has so many women who love her and that is an incredible thing to see.

Eventually we ended up at the house of Margaret, a woman who had dedicated her life to helping children. She helps get them out of dangerous situations and brings them to live with her.  On top of that, she also breeds dachshunds. 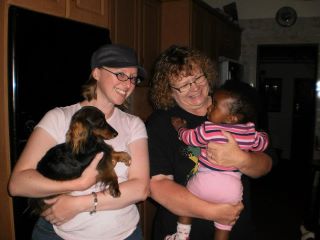 Here is another photo that Priscilla took.

She use to breed Sphynx Cats, like Piglet, and if she were still doing that Matt and I may have never left. We would have sat there covered in kittens.  As it was, Matt and I started making dinner as soon as we got there. We made penne pasta, red sauce and home made meat balls.   We enjoyed spending the afternoon making dinner and we fed about 15 people, maybe more. I kind of lost count. 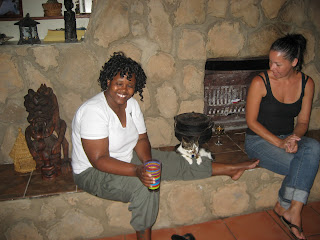 I love this photo of Mildred and the cat. 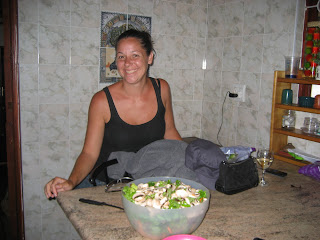 Priscilla made the salad! 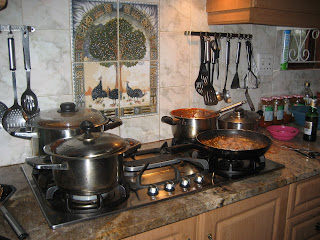 Our masterpiece in the making

Also, at some point that day, we were able to look at the soil test. We did the shake test that you'll see on page four of the PDF link. There were very interesting results.  We expected to see a mixture of sand, silt and clay, but that wasn't what we got. 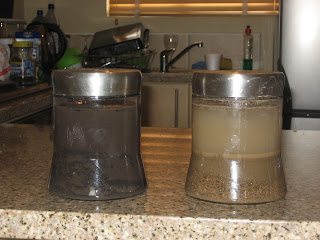 The black clay was really just entirely clay. The redder sand had no clay whatsoever, just silt and sand. What this means, though, is that the mixture of the two types of dirt should make pretty good filler for the earth bags.

Our last full day in South Africa has been a little more difficult to process. I have been contemplating exactly what I wanted to say about it since I got home, and I don't know that I can really articulate everything that happened. I am also not certain that I should articulate it in detail.

The morning started early. We left at 6am to drive out to a game park called Tala. Here are a couple of the cool things we saw driving around the park. 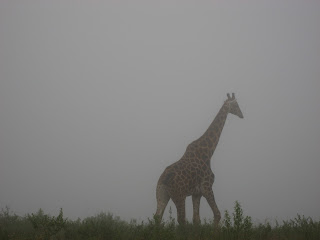 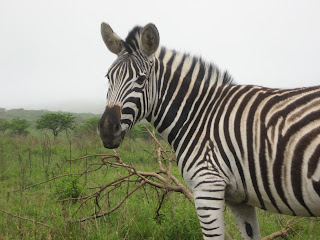 He was standing right next to the car, I didn't have to zoom in with the camera or anything.

While we were there, we got a couple of phone calls. The first was a pretty large NGO in the area that wanted to having a meeting with our group. The other was to set up a meeting with one of the Councilors from the Zulu community to get his blessing to build the shelter on the land next to Mildred's.  So, after we ate a lovely breakfast at the park restaurant, we headed back to the city to get ready for those meetings.
The meeting with the Councilor went very well.  We met him at Durban city hall and Mildred explained to him why we were there and what we were planning to do. She is very well respected and he told us that we had his blessing to do anything we could to help her and to help the children. We showed him the plans for the earthbag structure as well as a sketch of the long term vision which would include a separate boys and girls dorm, a kitchen and a community space.

After that meeting, we went to a bar on the pier over the harbor and had some snacks and drinks before heading back to the flats to get ready for the meeting with the other NGO.

Here is where things got a little crazy. I don't want to share a lot of information, but the meeting was pretty harrowing. All of us felt a little ambushed and caught up in the middle of a personal and political battle for which there appeared to be no solution. In the end, we were essentially told that our plans might not be able to happen as we expected.  The upsetting part about that is our project and the mission of the other organization are quite complimentary and we don't understand why we couldn't work together for the children. It isn't my battle, and I feel a little helpless that there isn't more that I can do, but in the long run we will figure out a way to make this building happen and to help these kids.

We left for the airport on Saturday feeling a little kicked in the gut, but we've had a lot to talk about and a lot to process since getting home.  As it stands now, the plan is to go back next year probably around August and get this project started one way or another.

Keep checking back here.  If it weren't for us taking this step to build our own tiny house in the woods and live unconventionally, we would have never had the opportunity to help this community half a world away that has so much promise and potential.

My next update will be back to the tiny house. We'll be up in Asheville this weekend working on some more of the finishing trim.  It is going to be a nice weekend to sleep in our cabin so I am looking forward to a rest.