Posted by Laura M. LaVoie on July 26, 2011
If you don't think that building a tiny house in the mountains is sometimes a little surreal, you would be mistaken.  We got a bit of a late start on Saturday because we made the mistake of staying out a little too late with friends on Friday night.  I thought that the drive up would be a little miserable, but we had a spirited conversation and the three hours zoomed right by.  Except we did give in to temptation and stopped at Burger King, of all places, on our way. When we did get up to Mt. Matt, we stopped at the barn for just a moment and then loaded all of our stuff on our backs and trekked up to the tiny house. 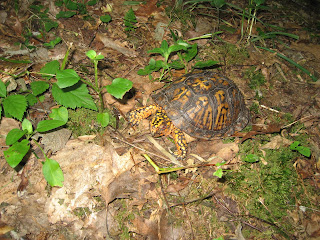 On our way, we walked past our spring. A while back, we installed a hose to divert the spring to a more advantageous location on the land and that left the spring reservoir dry.  But as we passed by it, we saw a little box turtle down at the bottom.  The spring reservoir is about the size of a Labrador retriever, so we knew the little turtle wouldn't be able to get out.  So, Matt unloaded all of his stuff and reached in to get the little guy.  He pulled all his appendages into his shell and hissed at Matt.  "I'm trying to help you, don't hiss at me!"  He walked back down the path to set him down where he wouldn't necessarily go back into the empty spring.  And we continued up to the house. 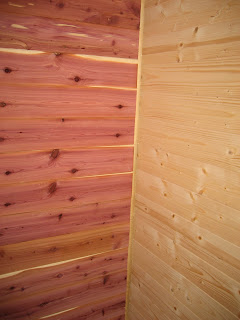 Once there, we were still feeling pretty tired but we fought off the urge for a nap and got down to work. The project for the weekend - finishing the siding for the closets and the cabinets.  We decided the best way to tackle the task was to divide and conquer. Once we determined the measurements and how much material we needed, I was on the saw cutting the boards while Matt was installing.  We finished the closets in short order. In the closet that is on the side of the "living room", we installed cedar planks on just the back wall. The material was awful to work with but it is pretty and smelled really nice. We're just glad we only did that one wall with it (we are doing the bathroom in cedar too, but a different type of cedar). That closet will house Piglet's litter box so we thought the cedar would be good for that.  Though, Piglet's litter box is currently in our master bedroom closet (the door stays open) and we don't have any problem with smell or anything there.  We finished up the closets by about 7pm and decided to go to a local watering hole for dinner.  The owners are great people so we spent some time talking with them.  They also just built a small hotel attached to the bar and they took us on a tour. Just two rooms but they are super nice. 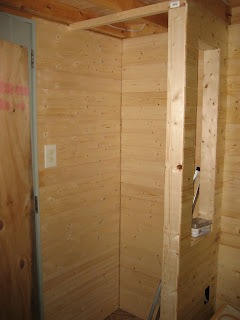 After dinner, we went back up to the tiny house.  The evening was starting to cool off and Matt sat out on the little front porch playing guitar while I climbed up in the loft, popped on my laptop and did some writing.  It was cool because I could hear him from inside and it was very relaxing.  After that we watched a movie and eventually fell asleep.  I will admit, it was a little hot - heat rises after all - but we had a fan in the storage loft opposite our sleeping loft and that helped circulate the air. I slept no problem.
On Sunday, we didn't hurry to get up and we started work about 11am. The only projects to do were to side the entry way ceiling and the sides of the cabinets. I had a lot of cutting to do, especially small pieces (for example, 40 pieces of siding at 3.5 inches...) so I cut and Matt nailed and we were done pretty quickly.  Earlier than we even anticipated, or planned for. Which was pretty cool and I think the first time in this whole project that we actually finished a part before we expected to. Don't let anyone fool you - building your own tiny house just two weekends a month at a time is hard work!  We were able to pack up and get out of dodge about 3pm.  To reward our hard work, once we got home we went to our favorite pizza joint. 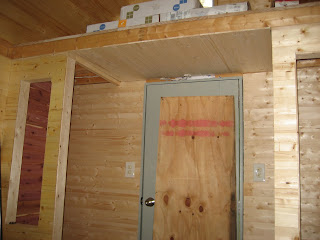 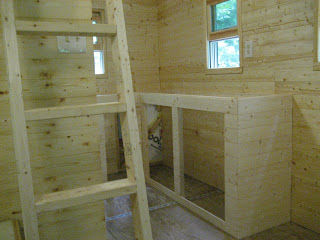 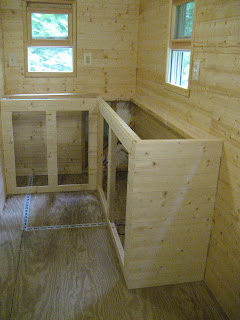 Also, I mentioned our new futon bed but never got a photo of that, so here you go. 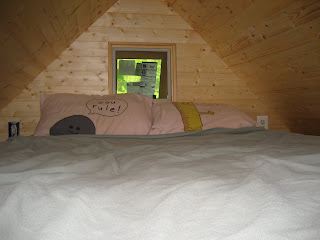 As it turns out, I happen to have this Friday off of work and the Asheville free music festival, Bele Chere, is going on.  So, after just getting home Sunday we will be spending only 4 days in Atlanta and then head back up to Mt. Matt on Friday. The plan then - the Floors!  I can't believe we are at that stage!  It'll be incredible to see that part finished.  Then when we look at the list of things we have left, it seems awfully short.  What a crazy journey it has been.
And remember, we will be going to South Africa in November to begin a project for the Zulu Orphan Alliance. They have us to help with the building and lots of people who can help build, but what they really need is money to make this happen.  If you are inclined, check out the ZOA website and make a contribution.
cabinets closets turtle