Posted by Laura M. LaVoie on July 05, 2011
Even before we began building the tiny house, we started hosting a 4th of July party at our mountain. This year marked the 4th Annual Independence Day at Mt. Matt and I think it was a wild success.  We got a lot of little projects accomplished but I believe we also had a lot of fun.

The weekend started for me and Matt on Thursday. He took me to work that morning and then came to pick me up at the end of the day so we could head right up to North Carolina.  We arrived about 9pm and just tucked in, watched True Blood on HBO Go, and went to bed.  As I write this, it feels like forever ago because we got so much done in the following days.

On Friday, I didn't set any sort of alarm and just got up whenever I was ready. I think it was about 9am.  I spent the morning setting up a kitchen area and getting the camping areas ready for folks to arrive.  We took the futon mattress up to the tiny house, launched it into the loft and made it up so we could sleep in there the rest of the week.  This was a huge milestone - this Independence would be our first in the tiny house. However, since we don't have a ladder built, we simply leaned the A-frame ladder against the loft to get up and down.  Well, I know it seems crazy but I'm afraid of heights and the though of having to climb back down an unsecured ladder led to a full on panic attack. I cried for a while and it took me about 15 minutes to even be able to climb down. I finally did, though. 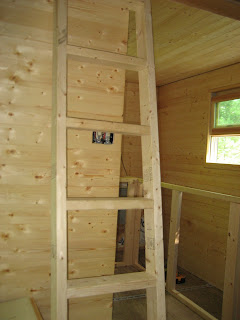 Around 3pm, our first guest arrived - our friend Andrew.  Once he got there, he and I went out to the grocery store to get all of the food for the weekend.  While we were gone, Matt built a temporary ladder for me! I was so happy - and it rocked.

When Andrew and I got back from the store, we organized the food and other items in the kitchen. Not long after that, our next pair of guests arrived - Bill and Susan. All of our guests set up their tents near the barn and since it was just the five of us on the first night, we decided to go into Asheville.  We went to Pack's Tavern for dinner.  We got back to Mt. Matt about midnight and Matt and I headed up to the tiny house for our first night of sleep.  I climbed up that ladder and settled into the bed.  For just a few moments I had some anxiety about what would happen if the foundation collapsed - but that was ridiculous, the house isn't going anywhere.  But eventually I processed my fear of heights and fell asleep. I slept quite well. It wasn't camping any more - it was just "living". 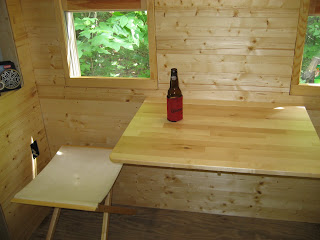 More people were set to arrive on Saturday, so we didn't want to get too involved with projects. We started the morning by making cinnamon rolls in the camp oven.  They were quite yummy.  After breakfast was over and people were ready for the day, we took the table up to the house to install.  We bought the table over a year ago and were very excited to be able to install it.  It is from Ikea called the Norbo. It works perfectly for the small space because it can fold down when we don't need to use it and want more space.  We also took two directors chairs that we had and removed the arms to make stools which work perfectly, plus we can use them as foot rests when we are sitting in the "living room".  As we were in the process of getting the table installed, our next victims...I mean, guests were arriving.  Andy and Emily came up to the tiny house to say hi, but then I went with them back down to the barn to help them get their camp site set up. As we were doing that, our friend Jill arrived.  Once everyone was set up we headed back up to the house to see the progress on the table. As you can see, it looked great once it was installed. 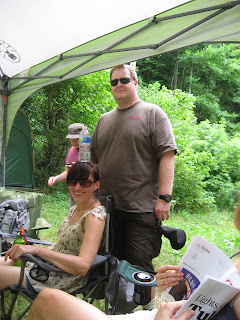 At some point, we retired to the barn for some lunch and snacks and we put up the shade canopy so we had some reprieve from the hot sun.  After lunch, Matt took some folks up to a tree that was leaning over the main path to help cut it down.  With some people on ropes, he was able to take the tree down without any injury.  It worked smashingly.

Dinner time was about 6:30 and I made two different kinds of stuffed shells in the camp oven along with some Italian sausage on the grill.  Our friend Chad arrived as we were eating.  Dinner seemed well received by all.  I really love using the camp oven. I had made the stuffed shells at home and froze them.  They had been in a cooler since and were able to thaw out enough to pop in the oven.  There were shells with ground beef and spinach mixture with a red sauce and shells with a ricotta cheese mixture with a white sauce.  Yum.

The after dinner entertainment was music.  Matt and Chad were debuting their new set with our friends to prepare for really playing out.  I think it was quite a success.  They started by playing the set they would play out.  Then we invited everyone else to participate. Susan brought her hammer dulcimer and Bill had his mountain dulcimer. The rest of us had shakers, tambourines, drums and other instruments.  Matt played the drum for a little bit then went back to the guitar for a full on sing along set. 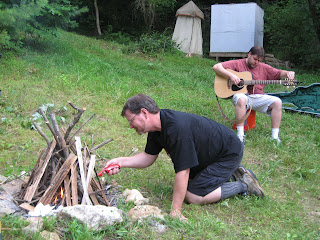 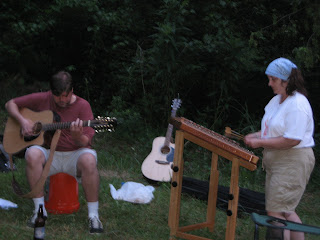 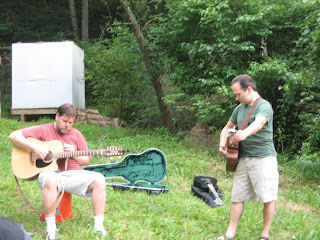 After the music was done, we hung out at the camp fire for a while.  Andrew mused that we should build a new fire pit, so a project was born for Sunday.

On Sunday morning, we gathered again at the barn.  Some folks took showers and I made some breakfast.  The morning fare - scrambled eggs, biscuits and pork sausage patties.  It was yummy and the perfect brunch.  After breakfast, some folks went out to Lowe's to get the stuff to build a new fire pit.  When they got back and got unloaded, there was discussion among some to take a drive out to Mt. Mitchell.  I stayed behind with a couple other campers and we had a lovely afternoon hanging out by the barn and enjoying some beer.  When the rest of the group got back we were regaled with stories of the tallest mountain east of the Mississippi.

On Sunday night I made some more dinner - this time, nachos in the camp oven and chipotle lime marinated chicken legs on the grill.  Andy and Emily packed up to head out and took some dinner with them and the rest of us built a fire in the new fire pit and enjoyed the evening and conversation.  I was informed via facebook the next morning that the nachos made "The Best Breakfast Ever".  Yay. 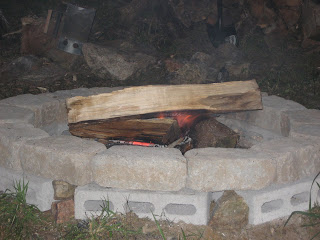 On Monday morning, I made breakfast by wrapping turkey sausage links in crescent rolls.  It was my only real culinary experiment (as I had tried everything else I served before). They were very yummy.

After breakfast, folks started breaking down their campsites and getting ready to take off.  Interestingly enough, the weather report had indicated about a 30-40% chance of rain throughout the weekend, but it held off - until noon on Monday.  Thunder started rolling and the sky looked dark and it just started raining as everyone finished packing their cars and heading down the mountain.  Matt and I waited out the the heaviest of the rain and left at about 1:30.  We had taken today off as well, but we are spending it at home in Atlanta instead.

We won't be back again for a couple of weeks, but the next projects include the floor, finishing the counters and cabinets, and siding the interior of the closets.
bed camping food friends independence day ladder music table