Posted by Laura M. LaVoie on June 20, 2011
So, the weekend started out wonderfully. Before I even left Atlanta, I found out that the Tumbleweed Tiny House Company website was going to feature us on the blog. That was super exciting. Matt was already up in Asheville, so I made sure he knew it was posted as well. I left work on Friday afternoon and drove straight to Mt. Matt. When I got there, Matt was eager to show me what he had worked on while I was still in Atlanta. Behold - cabinets! 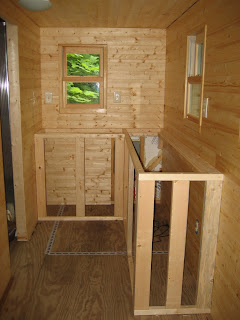 Needless to say, I was impressed. But that was the only building work we could get done that weekend because in preparation for an annual 4th of July camp out that we hold for a few friends, we needed to brush hog. Most of our 15 acres is wooded, but there are a couple of clear spots - the meadow behind the barn, the Tumbleweed Clearing, and another large clearing on way on the other side of the land. As well as a nice spot up near the ridge. Our day began by getting up early and heading to a local Home Depot that rented equipment. He asked if we had a truck and Matt said, "No, we have a very spirited Honda Element!" We have never lost the "What will fit in the Element" argument. We've put a brush mower in it before, so we were able to load it up easily and head back to Mt. Matt. We got back to the land about 10am and the sky was clear, the sun was shining. I left Matt to start mowing and went to a local grocery store to pick up some supplies for our 4th of July weekend - things like paper plates and cups and Deep Woods Off. I got back in about an hour and he was nearly done with the meadow. Here is an old photo from some brush hogging years ago. 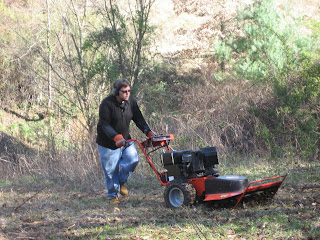 That is our friend Chad back in 2008 helping us out clearing the meadow. So Matt kept mowing. He even commented that it was a beautiful day for it but he could use another cloud or two. We determined that I would make lunch around 2pm so in the mean time,I did some cleaning around the barn and getting some things ready for 4th of July. At about 2, Matt came back down to the barn and I was getting lunch ready. And the clouds started rolling in. I figured it was just a "pop up" thunder storm, which is normal in the mountains. The rain started pretty heavy, and it was blowing in the barn. We ate our lunch and there wasn't much else we could do so we decided to take a nap to wait for the rain to stop. Finally, at about 3 or 3:30 it has stopped so Matt headed back up the mountain to keep working. I was going to do some work in the house but we decided it was pretty late and it wasn't a project I could stop halfway through, so instead I hung out at the barn. At about 4pm, the rain started again. At first, lightly and then a little harder. I actually called Matt to see if he took shelter in the tiny house, but he didn't answer. As it turned out he simply pressed on. I continued to do some work at the barn and at about 6pm he came walking up from the road. We had talked about making a "North West Passage" from the lower clearing to the road so I asked if he had done so and he said no, that he thought he had better check it out manually first - and he was glad he did because he didn't find a flat or straight enough trail to make it work. He was already soaked to the bone but the rain had let up a little so he took a short break and headed back up - now he needed to get the mower back up the steep hill from the lower clearing. The plan was for me to have dinner ready by about 8pm. Right about 7:30 he came mowing back down the trail to the barn. I had already started dinner but he had about 45 minutes worth of work left which was fine. I had fired up the grill and put potatoes in foil in the coals so they could stay there forever. When he finally finished I threw some steaks on the grill. By the time we ate, it was just starting to get dark out. After dinner, Matt took a hot shower and collapsed immediately into bed. We were woken up in the middle of the night by some serious thunder storms! Huge thunder and lightening making the barn shake. Tons and tons of pouring rain. And it didn't stop. I fell asleep again while it was still night, but even when the morning came it was still raining. It broke briefly at about 8 am so I got up but by the time I was dressed, it started again, and didn't stop. We wanted to be ready to leap at a moments notice to load the brush hog and head back to Asheville but didn't want to do it in the pouring rain. At 10am we finally had a break so we put a tarp down in the element and loaded the mower. We drove into town and dropped it off. Of course, Asheville was gorgeous - bright and sunny and beautiful. We stopped for a leisurely lunch and then went into downtown to buy a futon mattress for the tiny house (a perfect fit into the loft). Well, as you might expect as we were inside the futon store, the sky opened up. An absolute downpour. And we had to get the futon into the Element! We were soaked. As we drove back to Mt. Matt we were really hoping we had some luck on our side. We knew we couldn't get the mattress up to the house in the mud even if it stopped raining, but we could at least get it into the barn. We did that and packed up the cars and it was time to head back to Atlanta. It was an exhausting weekend - more for Matt than for me. It was exhausting for me dealing with the rain and the schedule. All I can hope for now is that we don't have those kinds of storms over 4th of July.
brush hog brush mower cabinets kitchen rain