Posted by Laura M. LaVoie on June 01, 2011
We aren't normally available over Memorial Day Weekend to go up to the land and work on the house. In years past, we attended a festival in North Georgia that weekend. This year, the festival was changed around and we were unable to attend on the new weekend, but we had already taken the vacation time for the Friday of Memorial Day weekend. There was only one thing we could do - go work on our tiny house.

I will warn you now, this post is photo heavy. I was so excited by our visible progress over the weekend that I couldn't help myself - I took a ton of photos.

The weekend was actually supposed to start on Thursday night. I was being chased by storms on my way home from work. No more than about 5 minutes after I pulled in to the drive to the apartment complex and into the garage, the wind and rain hit our building full force. Several of the Bradford Pear trees lining the driveway came down. People were packed into the lobby. Delivery people were stuck. There use to be two driveways to get out of our complex but there is major roadwork blocking the other exit right now. We went down to pack up the car and saw the trees down in the drive way. We decided to buy something to make for dinner at the store in the lobby and re-evaluate by 8pm. At 8pm we looked off our balcony and saw that traffic was packed in on the expressway. We checked the navigator website and there were problems all the way along our route to North Carolina. At that point we made the decision to go get our cooler and bags back out of the car and leave early in the morning.

The alarm went off at 5am and we were on the road by 5:45. We made great time that early in the morning and were just pulling in at Mt. Matt at 9:15. We unloaded the car, ate a breakfast bar and gathered our things to go up to the tiny house. After the prior trip where it rained much of the time, we decided to take our easy-up canopy to the clearing so we could keep working. There was rain in the forecast. We popped up the canopy and set it up over the work bench. It rained a couple of times on Friday, so we were glad we had it. The rest of the weekend was beautiful and the canopy provided much needed shade from the hot sun. The big project for the weekend: interior siding. In theory, this seems like an easy job. The house is only 120 square feet so how much work could it possibly be. We had already finished the ceiling siding so all that was left was the easy stuff, right? Well, it is a bigger job than it seems. Measuring, cutting, brad nailing...sometimes recutting and renailing.

This process took us the entire weekend with minor breaks for putting up some light fixtures just to see the semi-finished project. So, without further ado - here are the photos from the weekend: 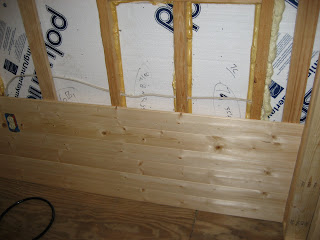 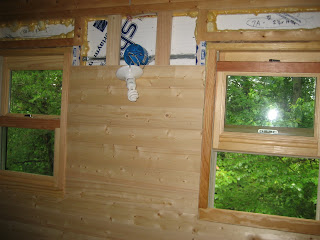 The first wall getting close 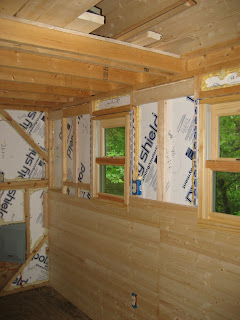 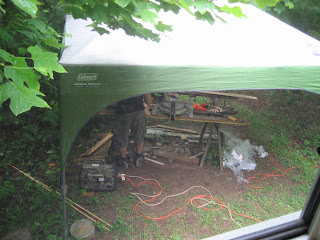 Watching the cutting from the window 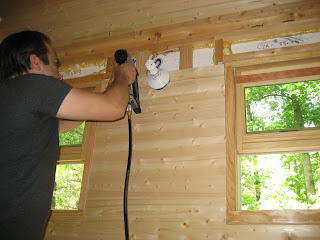 Air tools made this job much easier. 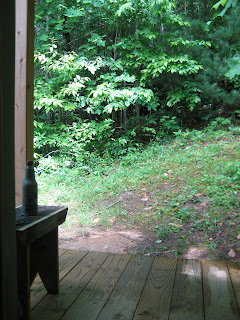 And...my view from the porch during a break 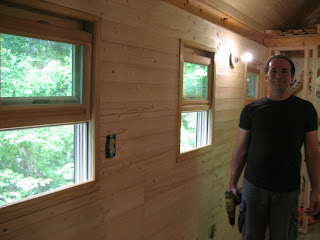 Matt is very proud of his work! 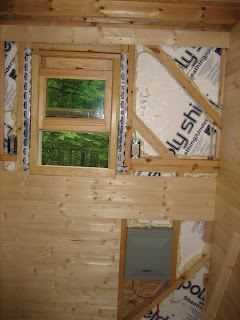 And so we move on to the back wall. The panel with the electrical was left open so we would have access to it from under the kitchen counters. 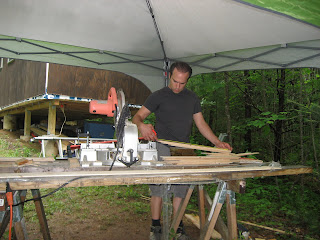 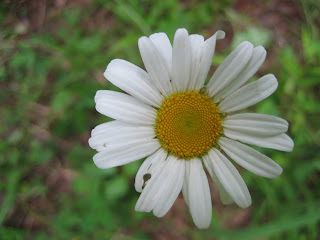 While I took a photo of this wild daisy. 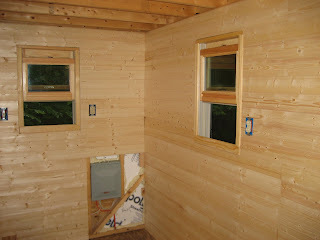 And then we had two finished walls. I believe this was still day one. 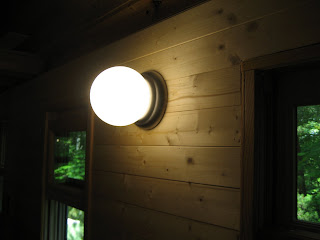 The first thing we did on the morning of Day 2 (Saturday) was put up our new Ikea light fixture - the Lillholmen. As described, it gives a good general light. 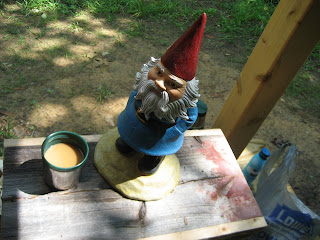 Then Chomsky took a coffee break. 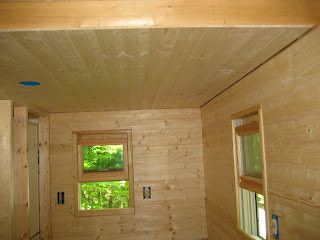 After that, we did the ceiling in the kitchen area. 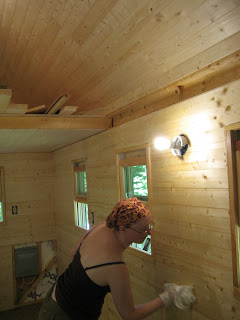 Then it was my turn to get down to work. My job: Tung Oil. This involves a lot of rubbing. Wax on, wax off. Like the Karate Kid. 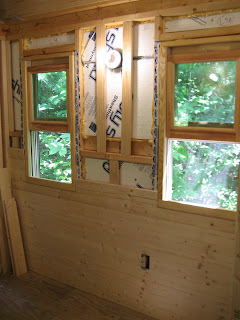 While I did that, Matt worked on the "dining room" wall. 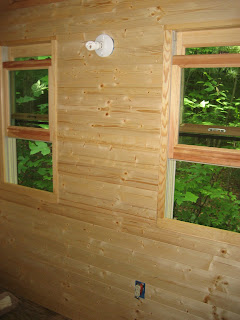 With that wall finished, I could swoop in and get that wall tung oiled as well. I believe that was the last thing we did on day two (Saturday). Though, by this point all the days were running together.

On Friday we had gone to a local restaurant to have pizza and while there we got to watch a local musician play, which was pretty cool. On Saturday, though, we built a fire and cooked in the camp oven while Matt played guitar. The meal for the evening: home made macaroni and cheese with chicken and apple sausage. I cut the sausage and mixed it in with the mac and cheese so it got nice and cheddary too. The apple and cheese was a great combination. Yum. I would do that again.
On Sunday, we got up and got started again with...more siding... 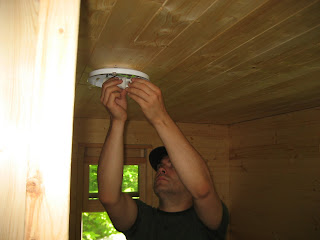 Actually, that isn't true. We wanted to get another look at another finished light fixture. For the kitchen, we had another fixture from Ikea, though I don't remember what one this was specifically. 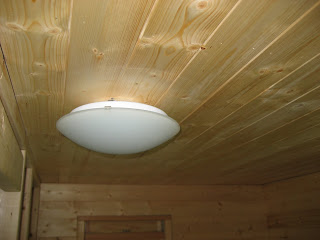 Really liked the look of that one too. 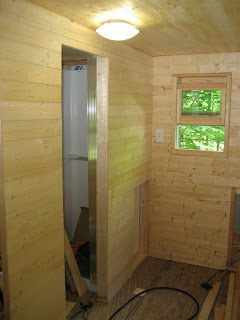 Then we got to siding the tiny bathroom. Crazy to actually see a finished "room" in the tiny house. 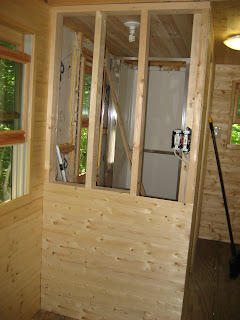 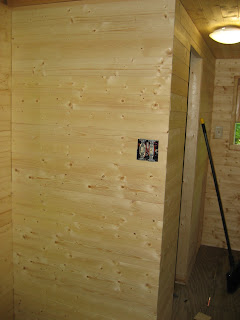 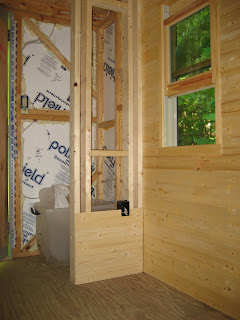 Last, but not at all least, were the two tiny closet walls at the front of the house. You may notice the interesting configuration of the studs. That is because between the two horizontal members, Matt is building an inset shelving system. They will be shallow shelves but perfect for things like phones and chargers and other small items. 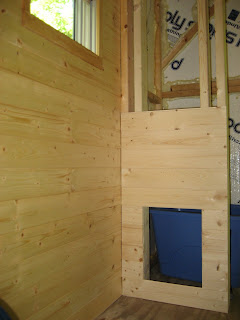 On the other side, you will also see the custom built cat door which is the entry to Piglet's litter box. You remember Piglet, right? 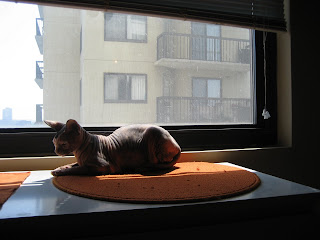 This is our little hairless beast enjoying the sun at our high rise apartment in Atlanta. 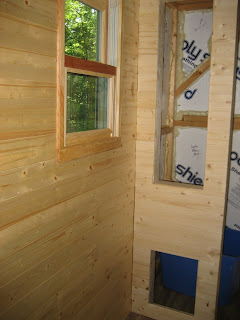 And so, we have two finished closet walls. 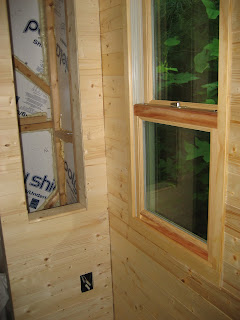 I thought I took a final photo of the entire house all finished up, but I failed. By the end of the day on Sunday I couldn't remember what I had and had not taken photos of.

We didn't finish up too late on Sunday at all. We got ourselves cleaned up and drove into Asheville for dinner. We ate at Curate, which was completely Yum. While there, I also enjoyed a Pisgah Endless Summer. Pisgah is one of my favorite breweries. After dinner, we wanted to get a coffee and walk around but since it was Sunday night our usual coffee place was closed so we just started walking. We ended up at The French Broad Chocolate Lounge. There we discovered Cold Sipping Chocolate with Caramel. Also completely yum. We wandered around Asheville because it was gorgeous outside and eventually made our way back to the car and back to Mt. Matt.

On Monday, we decided we were going to tung oil the rest of the house. Matt went up in to the loft and I finished the bathroom and closet walls. That was actually the hardest thing we did all weekend. I finished up first so I went down to the barn to pack up while Matt finished tung oiling the ceiling and loft gables. Once he was done we just had to pack up the car and go. It was about 3:15 or so. We stopped at a place called Stony Knob for lunch. And, so we were back on the road by about 4:30 or so and got back to Asheville at about 8pm. It was a great weekend. It is so satisfying to have such a visually impactful project done on the house. We're back up in two weeks, but we have a lot of outside work to do to prepare for our annual Independence Day at Mt. Matt event. As much as we love working on the tiny house, it will be a nice break to do some work on the land for that weekend. There is also a music festival going on at one of our favorite local bars so we'll spend much of the day Saturday there. Stay tuned for more progress updates!
gnome interior walls light fixtures lights siding tung oil