Posted by Laura M. LaVoie on May 18, 2011
We just got back from a long weekend at Mt. Matt. We drove up on Saturday and came home yesterday, taking two vacation days to work on the tiny house.

As I said, we started our weekend on Saturday getting up early and hitting the road by 7ish in the morning. Once we got to the Asheville area it was around 11 am so we stopped at Subway and picked up some lunch and headed up to the land. When we arrived, we unpacked the car and ate our lunches before deciding what to do next.  Rain was in the forecast, so we decided the most responsible thing to do was to load the rest of the siding material onto the ATV trailer and get it up to the house so we were ready to go.  While Matt did that, I organized our campsite, made the bed and set up the kitchen.  We got up to the house and started right on the first project of the weekend; the ceiling. 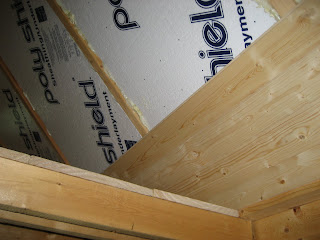 This process involved measuring the span and determining the lengths for each alternating row since the intention was for the panels to be staggered.  That was the easy part.  The hard part was fitting the pieces up on the wall especially across the span between the two lofts.  The first couple of runs were fine because I could stand up on a step stool and hold them while Matt stapled from the ladders, but as it climbed the wall, I couldn't reach.  It involved a lot of up the ladder, down the ladder, move the ladder, up the ladder, down the ladder. We had intended to do the whole ceiling on the first day, but as many of the projects have turned out this one managed to take longer than we expected.  We finished the first half of the ceiling not long before dark and so we decided to head to a favorite bar for dinner and a couple of beers. We returned to land and watched some TV on DVD and went to bed pretty early. 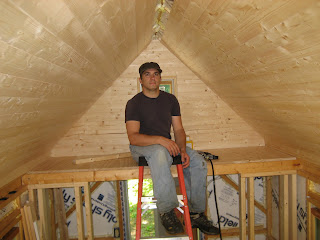 On Sunday, we slept in and woke up to a glorious mountain morning. We were energized and so we headed right up to the tiny house to finish the ceiling. Of course, it was with this second half that we hit our stride.  After the first couple of runs where I could still reach from the step stool we realized that if I went up into the sleeping loft I could help hold the paneling in place and even though Matt still needed to climb up and down and up and down, it went a lot faster. We finally hit our stride - at the end of the project.  Once we were done with that, we broke for lunch and then had to go up to Lowe's to get some things for the rest of the projects for the weekend.  When we got back to the land, we had to do a lot of planning and measurements for the furring.  We had a couple of supports we needed to put in to make sure we could install the folding table and the kitchen shelves. By the time we finished the plans, it was too late to start working so we decided to make dinner instead.

As part of my camp oven experiments this year, I tried a new recipe earlier in the week and froze it to bring with us.  It thawed in the cooler and was ready to be popped in the oven. It was a pretty simple recipe and something I would make again in a heartbeat.  I know this isn't a cooking blog, but in case you find yourself in the market for some nachos, try this sometime.  We used a pound of ground chicken and cooked it up in a tablespoon of olive oil and a healthy dash of red pepper flakes and minced garlic. I cooked that up until the chicken was done and added in a packet of taco seasoning.  Once that was all mixed in I added a can of black beans, drained, and a cup of salsa.  Once it was all cooked up I let it cool and put it in a tinfoil pan to freeze.  You can, of course, skip the freezing part.  At the camp, I stuck it in the oven at 350 for about 20 minutes and then added some shredded cheese and popped it in the oven again until it got all nice and melty.  Then I served it over chips.  It was amazing. While I was making dinner, Matt played some guitar and sang and after dinner we both hung out on the computer - he played a game for a little bit and I edited a short story that I wrote and need to get ready for submission to an anthology.  We went to bed about 10:30 and slept soundly.

On Monday, we got up and started to work doing the furring in the main part of the house.  While Matt was working on that, I got to work removing the labels from the windows with goo-gone. Seriously, who's idea was it to put labels on windows that are impossible to remove?  It took me all day to remove stickers from just 5 of the windows (I still have three more to go!). It was the stupidest job I have ever done. It involved spraying repeatedly with goo-gone, wiping aggressively with a clean white cloth, and scraping it with a plastic putty knife.  Stupid.  The furring ended up taking longer than we had expected as well and we really wanted to go into Asheville on Monday night so we decided to finish working at about 4:30.  We took some camp showers and headed into town.  We ate at The Lobster Trap and it was yummy.  We didn't stay out late and were back to Mt. Matt by about 9:30 and read for a bit before turning in.

We set an alarm to get up about 8am on Tuesday.  The intention was to start the main level siding. However, the weather had other plans for us. It was raining, so we didn't rush to get out of bed.  We finally made ourselves get up by 8:30.  We gave it some time but it just kept steadily raining.  We had to made a decision.  We went up to the house and, in the rain, moved all the siding (that had been under a tarp on the ATV trailer all weekend) into the house and straightened up in general.  Finally, at 10am we gave up and head back to Atlanta.


We're back up for Memorial Day weekend so we expect to be able to get the interior siding completed since we can just start with that.  One of my jobs will be tung oil-ing the whole house. We decided on doing that finish when we read about it on Evan and Gabby's blog and really liked the idea. We also need to build the kitchen cabinet frames and do the flooring. 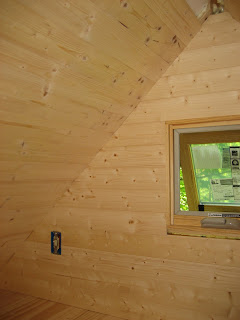