Posted by Laura M. LaVoie on March 28, 2011
As we were working on the Tiny House this weekend Matt reflected about people building cabins in mountains before power tools.  And we aren't even using a lot of the big guns - mostly just rechargeable Ryobi tools. I just can't imagine.

I finally had my camera with me this weekend with a fully charged battery as well as a back up just in case.  I tested it by taking a photo of the Tiny Gnome my sister got us for Christmas.  Every tiny house needs a tiny gnome.  His name is Chomsky. 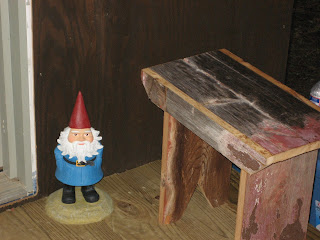 This week, we decided to head up to Asheville on Friday night so we could get up early and get going.  We stayed at a hotel because we knew if we camped and it was cold in the morning we would have a harder time getting out of bed and getting started. The main task of this week was the final (or nearly final) materials run.  We rented a Uhaul cargo van and picked it up right about 8am.  From there we went to The Home Depot and when they didn't have a large chunk of the materials that we needed we drive over to a nearby Lowe's.  There we had to make a decision.  They did not have the materials we wanted for our interior siding but they had something else that would not only "just do" but also be a good alternative and it was about half the price.  Problem is, they didn't have enough of it so the Lowe's folks (all of whom were very helpful - Nick, Julius and Grant) called over to the Weaverville store (which is on our way to Mt. Matt) and they had a good chunk of the rest.  We still need a few more, but we can get those in the element.  While at lowes we also bought some other lumber we needed to finish the closets and the cabinets.  We also bought the wood for the two loft floors.

We were also racing against the weather.  Heavy rain and thunderstorms were predicted and it had already rained in the mountains as the roads were wet.  We knew we needed to get the materials out of the van and into the barn room and were praying it wouldn't rain.  We got up to Mt. Matt and we got right to work.  Matt started the ATV with the intention of getting all the materials from the road to the barn in just two trips.  I went into the barn room and made some space for all of the remaining wood.  Thankfully, we did get the materials in without incident.  But since the next step of the process involved getting the wood up to the house, we decided to postpone that part for the next day or later.  Since the land was wet we didn't want to take the ATV all loaded down with materials up the muddy trails and make them worse.  We had to take the van back anyway so we decided to go back to Asheville and enjoy the afternoon while making some plans for the remaining work.  We ended up at the French Broad Brewery and Tasting Room.  After a couple of beers and some conversation with the bar tender, we walked around Biltmore Village for a while before heading back to Mt. Matt.

When we were back at Mt. Matt we went up to the house to take some measurements so we could cut the smaller loft floors down in the barn out of the rain.  It had rained while we were in the brewery and it was constantly threatening to again.  Then we settled in around 6pm for some dinner which I made in our brand new Camp Chef camp oven!  This thing was so cool!.  We got it for Christmas from Matt's brother and his fiance.  Works just like a camp stove - screw in the propane and ignite - but it is an oven.  I had made some lasagna during the week and froze it.  It thawed in the cooler and I popped it in the oven for about an hour and and then we enjoyed it.  It was hot and evenly cooked and tasty.  By the time we finished dinner it was dark and had started to rain again so we retired to the barn room, watched some Deadwood on DVD on the laptop and went to bed.

On Sunday morning it was kinda cold so it was hard to get out of the nice warm bed to get going, but we weren't in a hurry.  There was still rain in the forecast so we didn't know what we would be able to get accomplished.  We certainly didn't want to take the wood all up to the house and get the table saw set up to cut and then have to stop again.  So, we started with the boards for the smaller loft and cut them in the barn with the circular saw. Then we took them up to the house to get them installed.  And, I have pictures. 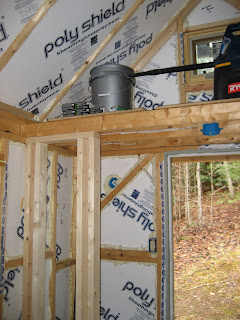 Here is the loft before with just plywood set up on the rafters. 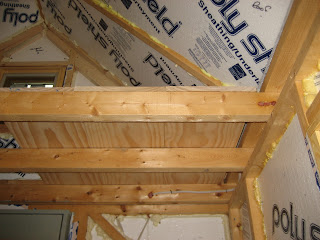 Here is me standing below while the boards are being placed. 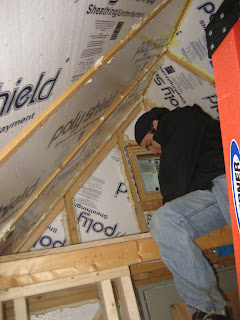 Matt screwing in the boards. 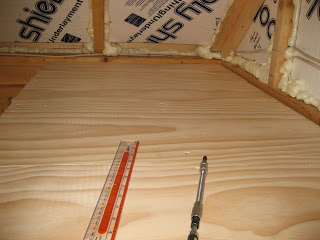 And the finished product.  Well, finished floors without walls or trim. There were a few hiccups in the process so we are glad we didn't rush to do the sleeping loft floors right away since we would change a few things before moving forward. However, the storage loft over the door looked great once it was done. 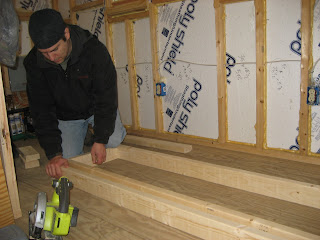 Then we decided just to finish the second closet wall before calling it a day. 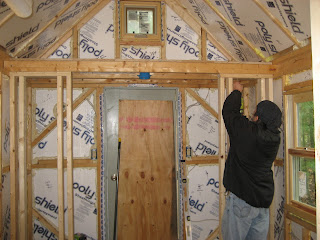 Once that was secure, we cleaned up and headed home.

The next trip in two weeks should be equally as productive.  We can finish the sleeping loft floors and start on the interior siding.  We are on track to being finished with the inside of the house - not including finish trim - by July.  We hope to have the furniture moved in and be able to stay in it.  It feels so good to be so close.
chomsky gnome interior walls loft floor rain