Now that it's out of my system, allow me to provide you this tiny house update.  This past week, Matt and I were on vacation throughout the South East.  We met up with our friends Dann and Cindy from Michigan in Savannah Georgia.  From there we went to Charleston South Carolina.  Both of those cities were a lot of fun, but this blog isn't about vacations.  The final leg of our journey brought the four of us to Asheville.  We drove directly from Charleston to Mt. Matt and started some work on the house.  Dann is the friend who wired the house last March and even though we were in Asheville on vacation he wanted to do some more work there. 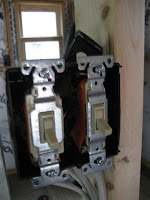 On a recent trip, Matt and I built one interior wall specifically so Dann could wire it this week.  We stopped at Lowe's on our way and picked up some things for him, including some cheap lighting fixtures just to test out the electricity.  We had only expected him to wire that one interior wall, but he took some time and did some additional fixtures, switches, and plugs.  This included a somewhat tricky three way switch that turns the light that will be mounted in the ceiling off from either the living area or the loft. 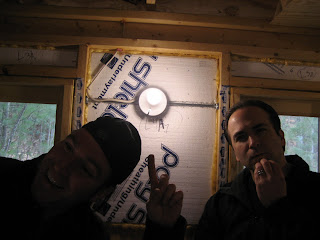 After Dann completed the electrical work, it was time for us to plug the house in and see how everything was working.  Essentially, the tiny house has an outdoor hook up like an RV would have.  When you park your RV at the campground you just plug it into the camp ground's electricity and you're good to go.  The tiny house has a plug on the under side of the house that we can plug into either a generator or a solar panel with an inverter and battery.  We don't have our solar panels up to the house yet so we plugged the house into the generator.  And, as you can see demonstrated by Matt and Dann, the electricity was a success!

This is an exciting advancement since we are about to start work on the interior of the house.  The generator had barely any draw off these light bulbs plus it could easily power any tools or chargers that we need while working.  Now, we can work past dark on the house!  We have had several work days where we were racing against the sunset to get just one last thing done, so this is a huge step.  These lights, of course, are not the finished product but just testers so we could make sure the wiring was working.  Another bonus to this method is that when we are not at the house we can unplug it or simply turn off the breakers and not have any power going to the house.

The next trip up we have some minor work to do.  These are just little things that need to get done to tie up any loose ends; like finishing the interior insulation and filling the soffits.  Once that is done we can work on the remaining interior walls and start to build the kitchen cabinets.  How exciting. 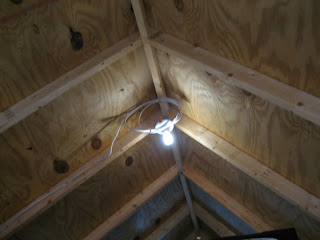 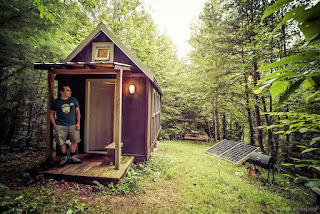 The Benefits of a Small Home

There is no doubt about it, tiny homes are popular. With a variety of reality TV shows across multiple cable networks, everyone has an opportunity to peek inside these minuscule dwellings. But what if the legacy of the tiny house movement isn't small homes on wheels but a desire to choose a home based on its purpose and fit for your lifestyle? This recent article from a Maine-based website makes a strong case for small, not tiny, homes .  photo by Giant Dream Photography The key point is that small homes are another possible option that is born out of the need to simplify our lives. While tiny homes on wheels are incredible and work for a lot of people, they don't work for everyone. And they shouldn't have to. It is a lot of pressure on a tiny house to assume that it is a on-size-fits-all solution for every American family. Over the last 4 years I've had the opportunity to experience both tiny and small homes. We moved into our 120 square foot home in May of