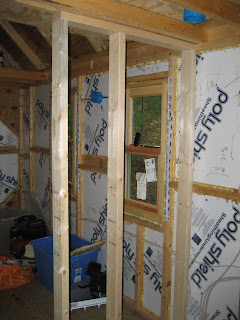 In our last trip of 2010, Matt and I moved on to a pretty important milestone in the building process - our first interior wall!

It was one of the best weekends we've had in Asheville, though no weekend has been bad really.  I took a half day off work so we got into town around 5pm on Friday.  We stayed in Biltmore Village because the Warren Haynes Holiday Jam was going on downtown and all the hotels were booked up.  Matt made reservations at a popular restaurant in Biltmore Village so we checked into the hotel and walked around that area of town before dinner, stopping at the new Village Wayside bar, which was very nice.  While there, we discussed some of the next steps of our lives and what we wanted to do moving forward.  There were some
interesting revelations that hopefully I'll be able to share.

Dinner at Fig was awesome right down to the bread pudding that tasted like Christmas.  After dinner we went back to the hotel where I made Matt watch this week's episode of Fringe, which I loved.

Since it was predicted to be cold in the mountains, on Saturday Matt and I took our time getting up. We got ready and headed out first stopped at Lowe's to get the supplies for the interior wall.  Some screws and two by fours later, we were back on the way to the mountain.  We stopped in the little downtown area for lunch only to find a parade.  We stopped and watched it for a moment before heading back to the main road to a deli for lunch instead.  After lunch, we made it up to Mt. Matt to start work.  It didn't take us very much time at all to construct the first interior wall.  Thought it is small progress, it feels huge. 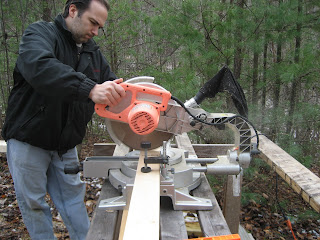 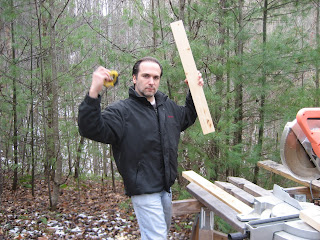 After the wall was built we cleaned up the area and headed back to Asheville for dinner.  After dinner we stopped at Sante Wine Bar where we ran into the owner.  She was off the clock, so she sat with us and
chatted for a while.  We met her on what was pretty much our first trip to Asheville several years ago when we accidentally stumbled into the bar because it was cold outside.  It was great to talk with her.

To top off a great weekend, on Sunday we woke up to snow in Asheville but not enough to be a problem. We went to a local sports bar to watch the Detroit Lions and in a Christmas style miracle, they managed
to beat the Green Bay Packers, who were playing for a wild card playoff spot.
construction interior walls