Posted by Laura M. LaVoie on July 26, 2010
There was a lot of work and years of preparation that went into the decision to purchase the land on which we are building the Tumbleweed house.  That being said, there is one factor that you just can't plan for.  And that is neighbors.  We had no idea on the day we closed on Mt. Matt that we would end up with a pretty darn cool group of neighbors living on our tiny mountain road.

This weekend was a little different for us.  Usually, we go up to North Carolina with a clear plan of what would need to be accomplished.  However, this weekend we were invited up for a block party and that was pretty much our only purpose for the weekend. 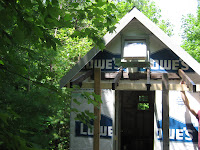 Because we can't stop ourselves, we did do some work on Saturday.  We actually arrived late on Friday night in time for bed, like we usually do.  On Saturday morning we got up around 9am and went to Zuma coffee for breakfast, which is one of our favorite weekend morning routines. We stopped and Ingles to get some food to take to the party that afternoon.  We loaded up the cooler with ice and our purchases before heading back to the land.  Then, we had a couple of hours of light work to do up at the tiny house.  Just little loose ends, really, before we could be 100% ready to finish the outside.  Matt stained the porch overhang that we built over 4th of July and I used Great Stuff Foam on the rest of the interior panels that we had already insulated but never foamed in.  Great Stuff is a crazy product and trust me from experience, you don't want to over do it.  When it says it expands to twice the size it is pretty serious about that.  Unfortunately, that means I have to do some basic clean up with a razor knife before we do the interior walls. There are worse problems to have, so I am not too worried about it. 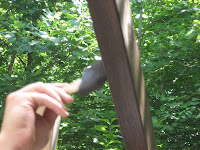 After finishing up at the house, we went down to the barn and enjoyed a Grove Park Inn Great Gatsby brewed by Highland Brewery.  Yum (I liked it better than the reviewer did).  While we relaxed before the party started, Matt practiced the guitar, a new hobby he has picked up and is really enjoying.  Around 4pm we started to get cleaned up and ready for the party.  At 5 we wheeled our cooler down to the road and met our top-of-the-hill neighbors on their way down.  The four of us walked down to the other house.  The neighbors hosting are the only ones who live there permanently and they have helped us out quite a bit in the time we've been working on the house.  The six of us hung out on the screened porch and enjoyed a couple of drinks.  Then the last group of neighbors arrived - a husband, wife and their 20 year old son.  Like us, they live elsewhere and have this land near Asheville where they are renovating an old house with plans of building some other things on their land as well.

As I said, the one thing we couldn't plan for when we bought our place were cool neighbors. And I think really really hit the neighbor jackpot.  Everyone on our road in Western North Carolina is fun, creative, and intelligent. The mountains drew us each there for various reasons so I suppose it was meant to be. 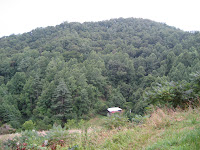 After dinner, we all went up to the house on the top of the mountain - the road dead-ends at their place.  There, we could see the most amazing and unobstructed view of Mt. Matt.  We intended to have some coffee, but it was still 90 some degrees when the sun went down, so we sat on the porch under the full moon and talked until late into the night.  Eventually, we all called it an evening and went our separate ways.


Sunday, Matt and I got up early and went for breakfast at Green Sage in Asheville.  We were going to walk around the Bele Chere festival that was going on downtown this weekend, but when we finished eating it was still only 10am to we decided to head back to Atlanta instead.  We got home, took a shower and went out to a nice dinner before settling in back home and watching the season finale of Doctor Who.

It was a great weekend, and one of the only weekends in recent memory where we went up to Asheville but didn't have days and days of work to do.  Believe me, I don't mind the work at all but it was a very nice break.  And it is great to know all the folks on our mountain road and all the cool stuff we are each doing.