Posted by Laura M. LaVoie on July 07, 2010
We just got back from our vacation up in North Carolina working on the Tumbleweed House. We had a great time.  Here is a recap for anyone following along. 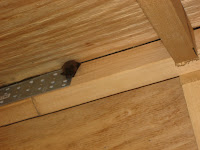 Matt and I actually left Atlanta on Tuesday night after work, so we got to Mt. Matt late at night in time to head to bed.  Considering it was the first day of vacation, we didn't really get our Wednesday started until about 11am.  The main goals for the day were to get the camp site set up and finish the outdoor shower.  We had a canopy malfunction during our last camping trip so we bought a new Coleman canopy that was beyond awesome.  That thing would survive most rainstorms that might pop up while camping, unlike our old one.   We also finished our outdoor shower.  The shower was a deck that we had built into a small clearing tucked behind the trees, but after the winter storms it became quite exposed so we recently built walls and on Wednesday morning we covered the walls with rubberized canvas.  We also got a gravity fed water bladder with a shower spigot on the bottom that worked very well for showers.  We added a cross beam with hooks to hang it.  Everyone said it was a very nice shower experience in the woods. Once we had the site pretty set up, Matt and I went into to town to go to Earth Fare. There, Eddie at the sandwich counter made us a super tasty sandwich that we ate at the cafe.  It was a late lunch, so even though we bought ourselves some things for dinner, we didn't eat them on Wednesday.  When we got back to the land we went up to the house to check on it and discovered a little bat sleeping on the ridge beam. When we walked back down to the barn, we passed a box turtle hanging out at the trail leading up to the ridge.  That box turtle was actually there all weekend.  We weren't hungry, so we decided to walk up to the ridge to see all the work that Matt did the last time we were up here brush hogging the trail. Gorgeous. We spent our first evening at Mt. Matt watching stars while Matt played some music on the guitar. 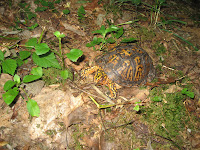 Thursday, July 1st
Day two was still just me and Matt, so we built the door jamb on the house and did some other little projects before just going into Asheville for the evening.  We did get text from our friends Rob and Christy that they were leaving Michigan and would be at Mt. Matt around 10am in the morning. 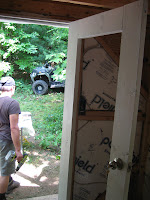 Matt and I went into the little town of Marshall to have breakfast at Zuma Coffee.  While we were on our way back, we got a text from the neighbors that Rob and Christy had pulled up the road, so we were right behind them.  Unfortunately, Christy was coming down with a cold so we set up the bed in the barn room for them and she took a nap.  Matt and I moved to our brand new Coleman tent.  I love Coleman camping equipment - I think I need to buy their stock.  We do a lot of camping and I found the tent quite comfortable.  I went up to the grocery store to buy all of our supplies for the weekend.  While I did that, Matt and Rob started on the door for the house.  When I got back, our neighbors came up - mostly looking for their dog who had been hanging out with Matt and Rob.  Their little cat also goes for walks with them which was super hilarious.  They went up to the house with Matt while I sorted out the groceries.  By the time I got there, they were starting to assemble the door, which turned out to be a great success.  After we finished that, our neighbors went home and Rob, Matt, Christy and I decided to head out for dinner.  We went out for barbecue, which was exactly what I was hoping for.  We came back and built a fire and hung out for a while before going to bed.

Saturday, July 3rd
Saturday marked the arrival of the rest of our guests.  Matt and I did some work up at the house in the morning, just basically getting things ready to do some priming of the door. Just after lunchtime, Matt went to Lowe's to get some supplies to build the porch overhang.  About 2ish, the rest of our guests arrived pretty much at the same time - Bill and Susan from Atlanta and Matt's brother Jim from Michigan.  We helped them set up camp and relaxed until Matt got back from Lowe's.  Then we went up and primed the door.  After the work was done, I made dinner for the group - bratwurst, macaroni and cheese, and coleslaw.  Matt, Jim, Rob and Christy played some football toss.  Christy was feeling much better.  We all hung out by the fire and talked well into the night. 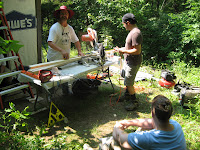 The big project for the 4th of July was building the overhang for the porch.  Matt and Bill figured out the engineering of the project by determining the math and angles and constructing a temporary structure to hold it up before a porch and posts were built.  Once the engineering was complete, the actual construction went quite smooth.  Sunday night, we made steaks and camping potatoes for dinner and built a fire.  Our neighbors came up to hang out by the fire.  We played music and sang by the fire.  After the neighbors went home, Jim suggested a starlight screening of Dr. Horrible's Sing Along Blog. A good time was had by all. 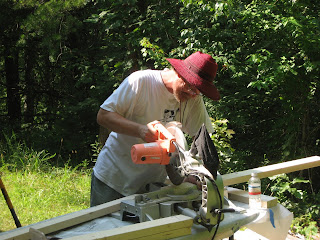 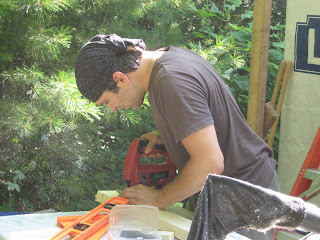 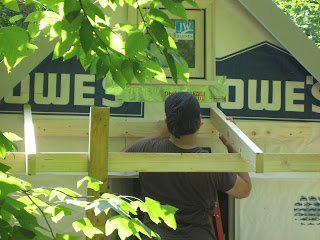 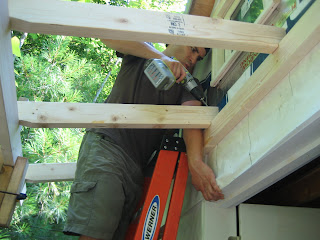 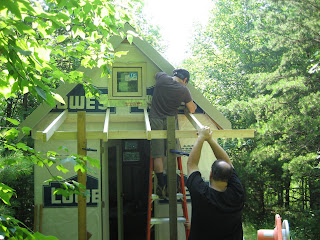 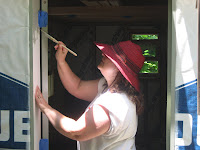 On Monday, Rob and Christy left for Michigan early in the morning.  Matt, Bill, Susan and I went up to the house and painted the door and all the windows. Jim took down his camp and was going to sleep in the barn room for the last night so he could just get up and go early on Tuesday morning.  After the painting was done, we helped Bill and Susan take down their tent and pack up.  Then everyone went into Asheville for dinner at Barley's Taproom.  Bill and Susan left from there and Jim, Matt and I went back to the land and built a small fire and watched some episodes of The Guild before going to bed.  Jim was going to leave around 4 or 5am so he said goodbye before we all went to bed.

Matt and I made the decision to leave Mt. Matt on Tuesday instead of Wednesday because we had done a lot of work and really just wanted to go home for Piglet.  So we decided to divide and conquer.  Matt went up to the house and worked on finishing the home wrap taping and putting in the drip edge flashing over the windows.  I took down the whole camp, packed and cleaned everything up at the barn.  We were ready to leave Asheville about 5pm.

It was a great week, we did a lot of great work, but it is also good to be home.