Posted by Laura M. LaVoie on June 21, 2010
Matt and I just got back from spending a long weekend up at Mt. Matt.  We took Friday off, and headed up to the land after work on Thursday.

The main focus of this past weekend was to prepare for guests.  We're having a few friends up over 4th of July again this year, so we needed to make sure that areas were cleared for camping.

On Friday, we got up early and drove over to a Home Depot across town that rents brush mowers.  When we got there, the rental center guy was completely unconvinced that the brush hog would fit in the Element.  We were sure it would.  Matt even said to me "I have never lost the 'What Will Fit In The Element' argument with anyone".  And sure enough, the brush hog fit neatly into the back of the element. 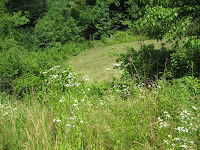 When we got back to Mt. Matt, we got to work.  Matt's job was brush hogging the meadow by the barn, the camping areas, the area by the shower and up the trail. 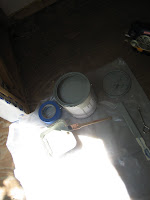 My job was to go up to the tiny house and paint the outside of the window panes the same gray as the metal roof.  We split up and went to work.

We were in the zone.  Matt pushed himself, maybe a little to hard, and brush hogged all the way up the trail to the ridge.  And I put on some music and painted the windows.  I admit to not being the best painter in the world, so I knew after the first couple windows that I would need to do a second coat.  That was fine, because it was only Friday after all. 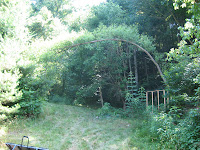 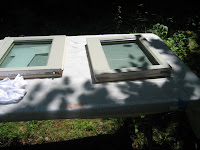 Finally, toward the end of the day, Matt pushed the brush mower toward the Tumbleweed clearing. I could tell he was exhausted.  His original plan was to take the brush hog all the way down into the lower clearing, but the path down is very steep and I was pretty sure he wasn't going to want to push the mower back up.  He agreed, and instead just took the mower down behind the Tumbleweed clearing down the trail we cut last year toward the spring and called it a day.

Once the work for the day was done, we cleaned ourselves up and loaded up the brush hog to return to the Home Depot rental center.  After dropping it off, we went into Asheville for dinner to celebrate.  We went to the new Pack Tavern downtown.  We sat at the bar and had a couple of tasty burgers and beers.  Then we walked right next to tavern to the park and sat for a while before heading back to Mt. Matt.

Saturday involved more of the same for me - a second coat on the windows.  They looked a lot better once I was done with that.  Matt spent the day with the chainsaw cutting down some of the last trees that had fallen during the Snowmageddon back in December.  There was one right next to the barn where people typically camp, but now it is nice and cleared out for 4th of July weekend.

Before starting work on Saturday, we went to Zuma Coffee for breakfast, which was delightful, and then to Ingles to buy stuff to make for dinner so we didn't have to go out again.  After I finished painting the windows and Matt was finishing up the tree clearing, I set up the grill and made some Feta and Spinach stuffed chicken sausages that we ate with Greek feta pasta salad.  Yum.  After dinner, we got back to work and constructed the final shower wall.  Our shower platform use to be secluded behind trees and with only a flimsy bi fold screen, guests were able to take a hot shower nestled in nature.  After the trees were leveled in December, we needed to do something else, so we built a couple of walls.  There was one more wall to go, and Matt and I put that together in about a half an hour before dark on Saturday.  Now, we just have to cover it with canvas material and viola, a shower!

Sunday, I ran up to the tumbleweed house to put the newly painted windows back in.  Then we cleaned up the barn, packed up the car and drove back to Atlanta.