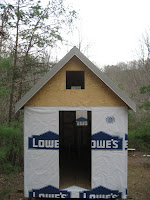 Last time we were up at the cabin, we had friends with us to do the electrical work.  With that big part of the project out of the way, Matt and I didn't have a whole lot of work to do this past weekend.  That made the trip pretty relaxing, to be honest.  The one big project we did tackle is to complete the home wrap on the gable ends.  Since the rest of the homewrap was harder than I thought it would be, I wasn't quite sure what to expect out of the remaining homewrapping process.  As it turns out, with a little creative thinking it isn't as difficult as it seems. 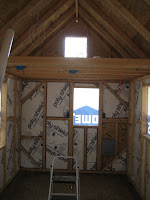 On the way up, we were thinking about different ways to handle it and I thought the easiest way was to cut a length of homewrap off the roll and just hold it up and staple it to the sheathing.  Then, we could cut off the extra pieces after the stapling was done.  We started on the front and as it turned out, having the extra corner parts flapping around didn't make it very easy to use the staple gun.  However, we finished the front half and then used the razor knife to trim the corners.  Then I had the brilliant idea of using those trimmed corners as a pattern to pre-cut the triangle of the back gable.  Worked like a charm.  I was supposed to get photos of that part of the process and I failed, so you'll have to make do with these fine photographs. 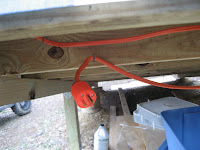 However, I did want to get pictures of some of the electrical wiring that our friends did the last time.  The house will be connected to a solar array (generator for emergency back up).  You can see some of the light fixtures and power outlets in the above photo.  To the left you can see the plug on the underside of the house that will be plugged into our power source.  Think of it like an RV that doesn't go anywhere. 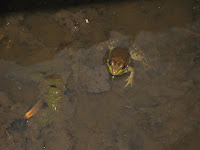 Also this weekend, I met this frog.  He has nothing to do with the building process, I just really liked him.  A couple of years ago, we built a small deck to serve as an outdoor shower platform.  We use a Coleman Hot Water On Demand to generate hot water while camping and then a cheap pump and shower nozzle to shower with.  It is perfectly adequate.  Also on our land is a spring.  These two things were not connected in any way, until a couple of weeks ago when we learned that if we connected the spring via tubing to a mysterious tube elsewhere in the ground, it came out through the other end of the tube that we discovered was conveniently nearby the shower platform!  So we connected a Y valve to the end of the tube and have the water drain down the mountain in the natural drainage ditch, but now we can also turn it to another hose and use the water for showering.  How marvelous!  And that was a total happy accident.  That brings me back to my friend the little green frog.  Now that the water isn't draining into the spring reservoir, it isn't very deep and this frog (and a froggy friend) was just hanging out at the bottom.  Super cute!
electrical frog house wrap tumbleweed tiny house